February 22, 2020 Guntersville, AL– It was a very chilly start to the Alabama Bass Trail North Division from Lake Guntersville with temps below freezing at takeoff. The predictions at the meeting on Friday night were that someone would catch over 30 pounds. February and pre-spawn conditions typically mean big bags, but the weather conditions were not going make it easy.  By Jason Duran 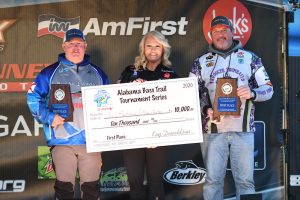 The team of Tracy Robinson and Mike Carter put a limit in the boat within the first 20 minutes of fishing their spot way up the lake. That quick limit included a fish weighing 8.69 and a second fish over 7 pounds.  They fished shallow grass in the 2-4 feet range targeting fish with jigs, crankbaits and bladed jigs. They noticed, “about mid-morning the water began to drop in the area, and it shut down the bite in those upper river creeks.”  They worked their way back down river “fishing traditional points and high places” using crankbaits. The final upgrade was made to their limit about 1:00 with a 4 pound cull putting them over the 30 pound mark. 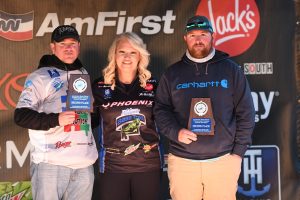 Wesley Sams and Jordan Wiggins returned to Guntersville after winning the ABT Championship here back in October 2019. Jordan said he “stumbled upon the spot they fished today a couple of months ago while practicing.” He described it as a “shallow ditch with about six feet of water and filled full of eelgrass.  It was just one of those places we came to at the mouth of a spawning bay packed full of shad.” They said, “these fish have been there for months. When we went back in there Thursday during practice to check them and caught two over 5 pounds, we knew they were still there.” Even though the water temps dropped over 5 degrees, Wesley and Jordan believe the colder temps actually made their fishing better. “It just made the fish stack up in there even more.” They primarily caught their fish on a bladed jig swapping up some with a rattle trap. They caught the 24.67 pound limit all on that one spot. They tried to run around some in the last few hours to upgrade and get the 30 pounds they knew it would take to win, but just couldn’t find any solid upgrades. 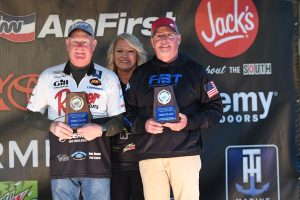 Danny Shell and Anthony Land have fished the ABT since the beginning and have placed as high as 4th place. They claimed the 3rd place spot. The team fished scattered grass in 6-8 feet deep water in the backs of pockets and the main river, targeting fish with only three baits: a bladed jig, DT 6 and a rattle bait. They moved around a lot rotating through six spots getting only 5 bites all day long. They caught all five, but one was a sixteenth of an inch too short. That fish weighed a little over two pounds but was released. The 4 bass bag of 24.07 was anchored by Danny with the Moutain Dew big bass of the tournament caught on a DT 6 weighing 8.93 pounds.

Tracy and Mike said they “talked all day long saying, we need one more 5 pounder because we are close, but don’t think we have it won.” They both agree that winning an ABT tournament is a “great accomplishment considering it is against the best fishermen in Alabama.” Especially after only catching one fish in practice, they were a little worried going into the event. Both said, “we had a blast and a great time fishing.”

The top ten standings are below for a full list of results visit. https://www.alabamabasstrail.org/tournament-series/lg-results/ 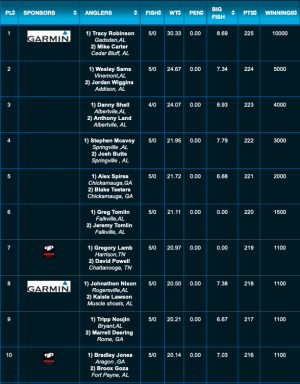 How to Submit a Bass in an Online or Kayak Tournament