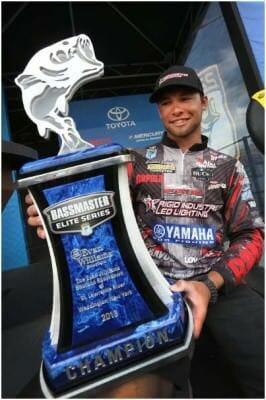 Catching the big smallmouths of the north country is usually no type of amazing feat – simply finding the right groups of them is the key to tournament success. At a place like the St. Lawrence River, it can be great fun to hammer on 2 1/2- to 3-pounders all day long, but those fish won’t help you much come weigh-in time.

You need to find a bunch that weigh 4 pounds and up. If you accomplish that, you can be pretty sure that, just like their smaller brethren, they’ll eagerly bite any number of baits presented to them on a dropshot rig.

As expected, dropshots completely dominated last week’s Bassmaster Elite Series event at the St. Lawrence out of Waddington, N.Y. Winner Brandon Palaniuk used them on Lake Ontario to amass more than 90 pounds over 4 days (his official weight was 88-12 after a 2-pound penalty was factored in) and it took an average of 19 1/2 pounds per day to finish among the Top 5.

Following are some details about how Palaniuk’s closest pursuers went about their work. 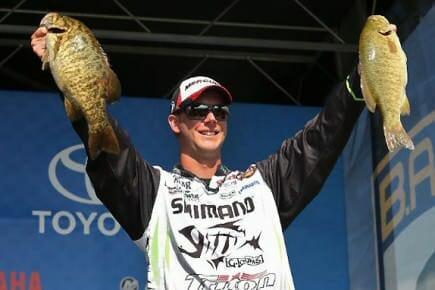 Jonathon VanDam divvied up a large flat about 40 miles downriver with fellow Top-12 cut-makers Kevin Hawk and Chad Pipkens. He estimated that it was at least a quarter-mile long, and it contained several rocky stretches that harbored large bronzebacks.

“They used that big chunk rock as a current break,” he said. “I caught them anywhere from 22 to 37 feet deep, but most of them were around 30 feet.

“When the wind picked up and made the current stronger, they’d always be behind the rocks. When it wasn’t as strong, they’d get out and move around a little bit more.”

He was the only one of the trio fishing the flat to catch a strong bag on the final day, perhaps because he fished a bit shallower than on previous days.

Main factor in his success – “I found an area that held a lot of fish, and there were some good ones in there.”

Performance edge – “I’d say my Triton/Mercury, for sure. I wasn’t running as far as (Palaniuk), but I was till making almost a 100-mile round trip and burning every drop of fuel every day. Having the confidence in your equipment to make those runs is huge.”

Lake Ontario was on Ott DeFoe’s radar when he arrived in Waddington and he attempted to go there on the final practice day, but cut the excursion short when conditions reached a point that he considered too rough. He’d just recently moved inside the Classic cutoff on the points list and deemed that the long run there and back on day 1 would be too much of a gamble.

“In my position, I just couldn’t have a bomb,” he said.

He dropshotted in the river for the first 3 days. He drifted along with the current, targeting humps and other high places.

“It was really good if there was a sharp drop on the front edge where the current hit it, but some would be on top and some would be behind it. I fished most of the time from 15 to 30 feet, but some of the fish were as deep as 60.”

He finally made it to the lake on the final day when he was assured of finishing no lower than 12th. He worked an extremely long point and caught fish from 15 to 25 feet down, again on a dropshot.

“The guys who were in the general area of the river that I fished didn’t catch them as good (that day), so it was probably a good decision. That doesn’t mean I wouldn’t have caught them, but it doesn’t seem likely.”

Main factor in his success – “Taking a shot in the dark on the last day. I knew I could only go 3 places down, but I could go 8 up, so I decided to go with it.”

Performance edge – “The whole rod-and-reel setup. I had two or three fish that I’d stuck for just a second that I didn’t get, but a lot of other guys had fish they were fighting come off. I really think it helped a lot to have a long, light-action rod.”

Cliff Pirch notched his second consecutive single-digit finish (he was 8th at the Mississippi River). He weight fell off considerably on the weekend after he’d exceeded 20 pounds on each of the first 2 days, but he dropped only 1 position in the standings per day.

It was his first visit to the region, but the Arizonan employed a style of fishing with which he’s very familiar.

“Being from the West, it’s pretty rare that I don’t have a dropshot rigged up regardless of where I’m at,” he said. “Everybody can do just about everything at this level, but with the time that the Western guys have put in with a dropshot, there might’ve been a trick or two that converted an extra half-pound.”

He stayed within 10 miles of the ramp on one of the tournament days and never got more than 25 miles away. His fish came from the 22- to 25-foot range.

“The places weren’t all necessarily the same kind of layout, but they all had rock with current coming to them.”

Main factor in his success – “I think it was just feeling confident about that kind of fishing.”

Performance edge – “That Skeeter’s sure nice to ride in those big waves. I had the confidence to go wherever I wanted to go.”

Aaron Martens’ confidence was sky-high after he caught a 26-pound bag on the first practice day – a sack that included a 7 1/2-pound bruiser that was the biggest smallmouth of his lifetime. That huge day also caused him to commit to the river when running to Lake Ontario was still in the back of his mind.

“The river probably doesn’t have the numbers of big fish that the lake does,” he said. “If I’d known the wind wasn’t going to blow very hard the whole tournament, I’d have gone to Ontario.”

He settled on an area about 20 miles downriver from Waddington.

“There were fish everywhere – you could randomly stop on any point and drop a worm down and get bit. I caught fish from 5 to 45 feet (deep) and everywhere in between. Any rock or anything with a hard bottom had them.

“I just used up all the big fish I had. I’m sure there’s still a ton of stuff out there, but the places with the bigger ones are hard to find. I’d love to come back because there’s so much stuff that nobody’s touched.”

> He caught several fish on the breezy afternoon of the final day on a  jerkbait (elegy bone) and several on a 3/4-ounce Davis X-Vibe spinnerbait.

Main factor in his success – “Switching to the jerkbait (on the final day) really helped.”

Performance edge – “My graphs and sonar units were a key component for finding the little oddities and areas where the current hit the bank at a weird angle, and my 21 1/2-foot Phoenix was the perfect boat for those conditions.”

Matt Arey Does it Again