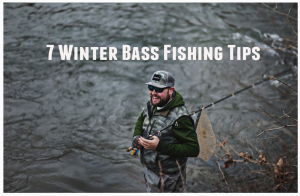 One of the most widely sought out fish species in the angling world, bass are tough fighters that can be found all over the earth. With decades of popularity under its belt, the sport of bass fishing exists in a world of its own now, and a wide array of information and bass-specific angling tools are at your fingertips.

Can You Catch Bass in Cold Weather?

There is a prevalent myth surrounding cold weather bass fishing: You’ve got no chance at a catch if it’s past autumn. This notion has to do with the cold-blooded nature of the fish; dropping temperatures can seriously affect their body functions, most notably, a slowing metabolism.

With food metabolizing slower than usual, it reduces a bass’ need to feed as regularly; but this does not mean they do not eat in winter months. So yes, while cold weather does make it a little tougher to pull in a catch, despite what you may read, there are still fish that will chase a bait, even in frigid temperatures.

As a whole, the population of bass in your local lake or river will probably be less active, but in some bass, there is little noticeable change from summer to winter. For the more lethargic bass, some extra incentive may be needed before they take the bait.

Winter Bass Fishing Tips – Everything You Need to Know

With an extra obstacle in between you and your catch, it’s important to have some tips and tricks under your belt for wintertime fishing. Snagging a bass in the colder months is definitely not impossible, just a little more complicated. Here’s a list of tips and tricks that can make the process less painful:

1. Use the Right Bait and Downsize

While some hardcore bass fishermen think that using live bait is cheating, we don’t. Lures are definitely a more popular choice for winter bass fishing, and we’ll go over those in tip six, but live bait might just be the way to attract a lazy fish during cold weather.

During the winter, downsizing your bait is fairly important, as bass aren’t as likely to fight for a large piece of prey. So if you’re using live bait, rather than hooking up a crustacean, put something a little smaller on the menu.

Worms and small baitfish like shiners and creek minnows will likely be your best bet in the winter months. But before using live bait, if you want to be successful, be sure you have the right rig to keep them healthy and fresh before using.

Imagine you were a cold-blooded animal with frigid water flowing through your body for at LEAST three months; your movements would probably slow down, too. To have the best chance at a catch, many talented anglers recommend mirroring the bass’ winter movement patterns. This means keeping your bait’s action slow, steady, and lethargic.

Because bass will be moving much slower in the cold weather, they’re more likely to go for a bite they don’t have to fight for. Keep your bait near the bottom of the body of water, and keep it steady.

3. Keep Near the Shore in Rivers

In the winter, you’re much more likely to find bass hanging out near the shore for a couple of different reasons. The fish will migrate near river banks because they’re much more shallow and a little warmer. There are also more baitfish and other bass-attracting structures near the shore, which make it an appealing resting and feeding spot for the fish.

Although you can fish the shore from a boat, it is a little easier to go directly from the shore. This eliminates the annoyance of trying to keep your watercraft steady in the face of wind, waves, and current. It also puts you directly on top of the bass that are probably chilling along the banks, which makes it much easier to sneak up on them without a commotion.

In the bank areas that have been warmed by the sun, try out a drop shot rig. This will give you a fair chance at a catch, even if the fish are a little more sluggish than usual.

4. Stick to Deep Pockets in Lakes

In lakes and ponds, when the weather takes a frigid turn, many bass will make their way to the deepest part of the body of water. In fact, no matter what the season, there are many bass that can be found in deep pockets in a lake, but during the winter especially.

Bass like these deep spots because they can find bottom-dwelling food there that is easy to catch in their lethargic state. The majority of the bass population will hang out there in large quantities, as they tend to group together more consistently when it’s cold.

A water temperature gauge or fishfinder can really come in handy when you’re on the lake in the winter. Some expert anglers say “the colder the better” when it comes to deep water bass fishing. The ideal temperature range is below 50 degrees and you should stick to pockets within the 15-30 foot range.

5. Scout the Bottom of Wherever You Are Fishing

As was previously mentioned, regardless of what you might read, a lot of bass like to stick near the bottom of a lake or river no matter the season. Scouting the bottom during winter becomes more important when fishing in a river.

If you’re fishing along a shore, there’s a good chance that you can see clearly into the water beneath you. If this is the case, then vice versa, the fish can see you too. But luckily, you have the advantage of being above, so you can easily sneak up on them and watch them prod at your bait.

When you’re fishing the bottom, a drop shot rig or a shaky head rig can work really well. Both of them look extremely natural and are easy to manipulate action-wise.

6. Use the Correct Lure

There are several lure options that are a little more effective for the winter months than others. Throw out the idea of using topwater and fast-moving lure- they’ll only waste your time. Here are a couple of lure options that should do the trick:

As you’ve probably noticed from reading through this tip list, fishing for winter bass isn’t easy. But even though it’s not the easiest task in the world, it’s also not impossible! The process will definitely take more time than you’re probably used to, so for this reason, it’s most important to be patient.

No, you won’t get as many bites as you would during the summer or spring, but there’s a good chance that the bites you do get during the winter will be much more rewarding. During the winter, there’s no such need to rush out the door at the break of dawn. Take your time and drink a second cup of coffee before heading out to the lake.

Once you’re on the water, a great technique that does require a good amount of patience is a “jerk, jerk, pause” cadence. After a couple wiggles, let your bait rest for at least ten seconds, if not more. This will draw your catch to a bite.

If you’re a seasoned angler, you know how tough it can be to stay inside during the winter with hundreds of potential catches just out of reach. So this year, why not take the leap and head out in the snow to try your hand at winter bass fishing. Remember, in winter bass fishing PATIENCE makes perfect. Happy fishing!

Tips for Safe Fishing on a Boat