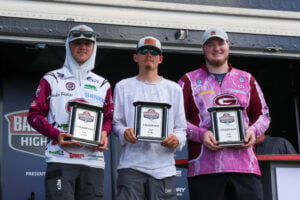 SHELBY COUNTY, Ala. — Although they only live about an hour from Lay Lake, Will Phillips and Fletcher Phillips from Gardendale High School had not spent much time on the lake prior to this weekend.

After catching 17 pounds, 15 ounces to win the Mossy Oak Fishing Bassmaster High School Series at Lay Lake presented by Academy Sports + Outdoors, Fletcher said they will definitely be back in the future.

Along with the win, Fletcher and Will earned Big Bass of the Tournament honors with a 6-12 largemouth they caught near the end of the day. The Bainbridge High School duo of Caleb Reynolds and Lex Thompson followed in second place with 14-9, while John Nutt and Carter Nutt from Backwoods Bassin’ finished third with 14-5.

It was pretty exciting,” Will said. “Even though I didn’t catch the big ones, it was pretty nice watching him catch them. I caught them in the net. Basically, half the work.” 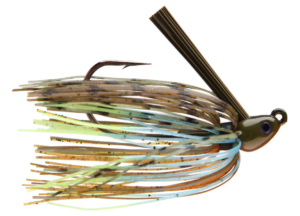 Fletcher and Will split their time between fishing grass banks and main-river current breaks, using a warmouth-colored Dirty Jigs Swim Jig in the grass and a finesse jig in the current. The morning started fast with two keeper bites, although Fletcher lost a quality fish that would have increased their total weight.

The morning bite fizzled quickly, however.

After catching the big spotted bass, the duo moved to a creek arm and on the first points Fletcher landed a 4-pound largemouth. Several minutes later, he hooked their biggest bass of the day.

“We go all the way to the back and don’t get a bite and come back out and I catch a little one,” Fletcher said. “I threw up to the second point after the point I caught the 4-pounder on and it blew up and I caught it.”

Hailing from the Lake Seminole area of Georgia, Reynolds and Thompson had a tough practice but were fortunate enough to grind out six bites on tournament day.

“We didn’t catch our first keeper fish until about 8 o’clock,” Reynolds said. “I caught two on a crankbait and then at about 10:30, Lex caught two on a shaky head and another that was about 12 inches.”

With time winding down, the Bainbridge duo caught their biggest fish flipping grass mats, culling out their 12-incher in the process.

Heading into the tournament, Thompson said the game plan was to flip grass all day but found a point with rocks and stumps where they thought they could catch some spotted bass.

“It worked out for us,” Thompson said. “We caught the first three pretty quickly and I figured it would be a spotted bass day. But not long after I caught one of the bigger largemouth.”

The Lay Lake event marked the end of the regular season for the High School Series. The Top 19 teams secured their spot in the 2021 Mossy Oak Fishing Bassmaster High School National Championship presented by Academy Sports + Outdoors to be held at Chickamauga Lake, July 29-31.

The tournament was hosted by Discover Shelby.

Everything You Need To Know Before Going for a Bass-Fishing: A complete guide