By following three simple rules, and one wise principle, you can spend a lifetime avoiding collisions on the water.

On the water, with no lane markers, stop signs, traffic lights, or crosswalks, you’d think every busy weekend would bring pileups of boating accidents. Why don’t they? The answer lies in the Navigation Rules, more properly called the International Regulations for Preventing Collisions at Sea.

To learn whether your home waters are covered by the Inland or International rules go to: www.navcen.uscg.gov

At their core, the Rules are surprisingly simple. Still more surprising is how well they work. We’ll focus here on recreational powerboats in clear daylight. Later, we’ll look briefly at other kinds of boats and other situations.

The key to the simplicity behind the Rules starts here: There are only three ways boats can collide — overtaking, meeting head-on, and crossing. As long as you know what to do in each scenario — as well as what to do when the other boater doesn’t follow the Rules — you can be reasonably assured of avoiding collisions throughout all your time on the water. There’s a beautiful quirk in the International Navigation Rules: They avoid the phrase “right of way.” Instead, they refer to a “give-way” vessel and to a “stand-on” vessel.

“Every vessel which is directed to keep out of the way of another vessel shall, so far as possible, take early and substantial action to keep well clear.” (Rule 16 — Action by Give-Way Vessel.) 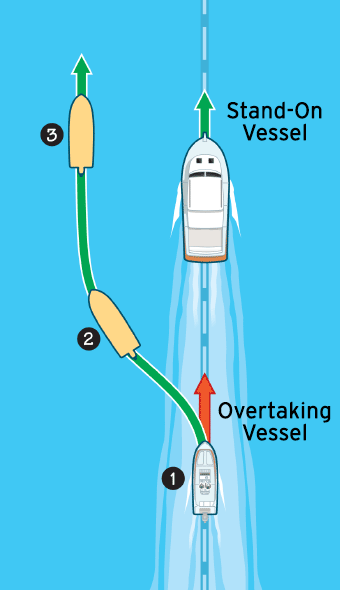 “Where one of two vessels is to keep out of the way, the other shall keep her course and speed.” (Rule 17 — Action by Stand-On Vessel.) This brings up one of the most important principles underpinning the Rules: that it’s more important to avoid an accident than it is to follow the Rules. The implication is that no one has the “right” to keep course and speed if doing so will lead to a collision. Rule 17 allows the stand-on vessel to “take action to avoid collision by her maneuver alone” as soon as she recognizes that the other boat isn’t following the Rules, and Rule 2 makes every boater responsible for taking any precaution which may be required by the ordinary practice of seamen or by the special circumstances of the case. (Rule 2 — Responsibility and Rule 17 — Action by Stand-On Vessel.) Let’s look at those three scenarios and see what the Rules say about how to avoid collisions.

This one’s simple: “Any vessel overtaking any other shall keep out of way of the vessel being overtaken.” See Figure 1. So far, so good. But when, exactly, is a vessel overtaking? The Rules are explicit: when she’s coming up on another from a direction more than 22.5 degrees abaft her beam. OK, but what if you’re not sure about the angle? Again, the Rules answer that one: Assume that you are overtaking. (Rule 13 — Overtaking.) 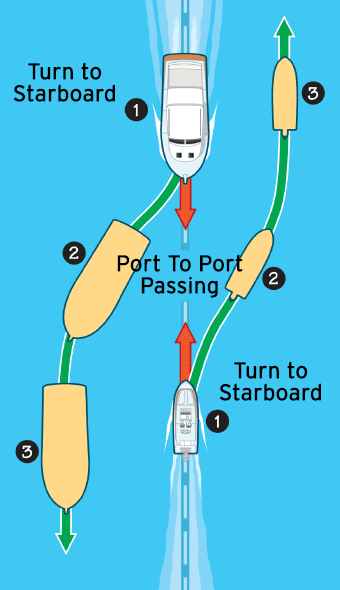 “When two power-driven vessels are meeting on reciprocal or nearly reciprocal courses so as to involve risk of collision, each shall alter course to starboard so that each shall pass on the port side of the other.” See Figure 2. But what if you’re not sure whether your courses are reciprocal? Again, the Rules are ready for that one: Assume that they are, and act accordingly (Rule 14 — Head-On Situation).

These three situations are by and large handled identically whether under Inland or International Rules. See Tip to learn which rules apply to you. But Inland Rule 14 adds a wrinkle for the Great Lakes and certain other inland waters: “A power-driven vessel … proceeding downbound with a following current shall have the right-of-way over an upbound vessel.” Notice that phrase “right-of-way”? This is one of its rare appearances — and it’s in the Inland version only, not the International. 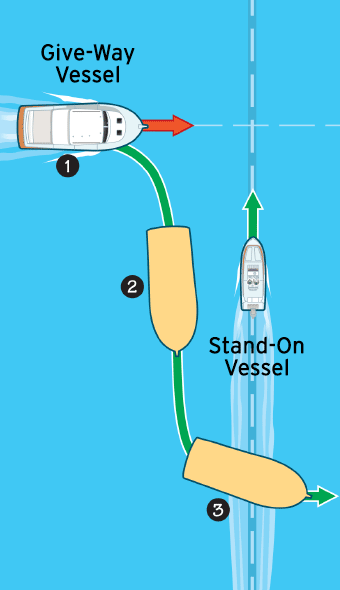 “When two power-driven vessels are crossing, so as to involve risk of collision, the vessel which has the other on her own starboard side shall keep out of the way and shall, if the circumstances of the case admit, avoid crossing ahead of the other vessel.” See Figure 3.

And that’s it. The idea is that if a boat poses a collision risk, it can only be coming from one of three directions: ahead of you, from the side, or from behind. Of course, we’ve only spoken here about powerboats that can see each other in daylight. Sailboats under power, even if they have sails raised, and personal watercraft follow the same rules as power-driven vessels. Other Rules describe the different responsibilities of sailboats, fishing boats, tugboats, and others, as well as boats operating at nighttime or in fog. (See sidebar.)

What about canoes and kayaks? The Navigation Rules treat them as vessels, but they aren’t explicitly included in the hierarchy of stand-on and give-way vessels, nor are they named in the Rules that recommend actions to avoid collision. The U.S. Coast Guard website replies to the question this way: “Ultimately, the issue of who gives way would fall to what would be ‘required by the ordinary practice of seamen or by the special circumstances of the case’ (Rule 2 — Responsibility).” Common sense says that canoes and kayaks should paddle outside marked navigation channels, cross any channels quickly and at right angles, and keep to the sides of navigable creeks or rivers when other boats are using the deeper channel.

Reading and understanding all 38 of the Navigation Rules should help you avoid any waterborne pileups and other problems. But on a recreational powerboat, with these three simple Rules firmly planted in your mind, you can focus better on what’s really important: the indelible fun of being out on the water.