July 25 – Gadsden, AL– The fourth stop of the Alabama Bass Trail North Division at Neely Henry Lake was an exciting win for the team of Adam Brown and Greg Diggs. The team planned to fish skinny water and ended up winning by the skinniest of margins. With 15.67 pounds of Neely Henry bass, they took home the $10,000 prize and qualified for the ABT Championship.

The first-place team of Adam Brown and Greg Diggs originally planned to fish creeks, but since they were boat 183, they expected lots of other teams to be in those creeks. To help them have more areas to fish, they decided to use a shallower running boat to go even more shallow than the competition. They went with that plan until they pulled into their first creek, looked around and noticed hardly anyone else was there. “When we pulled in, we just sat there for a minute and stared at each other in shock that we had it almost all to ourselves,” said Diggs. They were then able to not only fish shallow in the creeks, but also target the mouths of the creeks.

Adam said “the plan all along was to go shallow this time of year.” He shared, “that the deep bite here really is just hard and there are only a couple good areas that are usually covered up  with fishermen.” They spent the day rotating between three creeks in a 10-mile radius from take-off, fishing water from 2-6 feet.  Both have been fishing Neely Henry a long time and were able to use that history to put together this win. Two key baits that were used: a black and blue Bo’s Jig and a chartreuse and white Bo’s Spinner Bait. “We have lost many times by an ounce and to win by an ounce really feels good after losing that way before.” 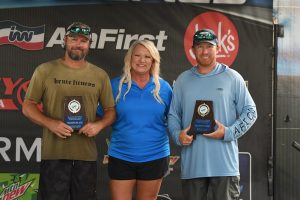 Bradley Jones and Broox Goza finished in second place with 15.52 pounds. Broox said they really wanted to “catch them out of the grass, but the grass bite just isn’t working right now.”  He shared that he found some fish in practice that were keying in on shad, so they decided to make that the plan and spent most of the day targeting main lake bars with shad.  Bradley said that pattern “produced a limit around 10 pounds.” In those areas they used a homemade spinner bait and buzz bait with a Horny Toad trailer. In the afternoon, the weather began to change as the rain moved in hard. With conditions changing, they decided to go shallow “flippin’ shallow gravel bars” according to Broox and were able to catch a key 4-pound fish that helped them upgrade their limit to move them into second place. 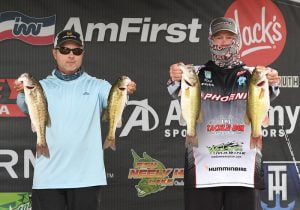 The third-place team on Neely Henry was Mark McCaig and Tim Hurst with a total of 14.38 pounds. Tim said they “spent most of the morning fishing shallow and had an 8-pound limit around 11:30.” That limit included a really good spotted bass and a 3.75 largemouth. Mark said they covered a lot of water “starting about a mile north of take-off and fishing south all the way to the Neely Henry Dam.” Tim said, “the bite got better in the afternoon when wind started picking up in the area where they were fishing”.  During the afternoon they were able to cull three of their morning fish and upgrade to their 14.38 weight. That limit included two spotted bass and three largemouth. They left the area early because the storms were getting closer and “neither of them wanted to get struck by lightning.”  They caught over 15 fish all day on three key baits. The large spotted bass was caught on a Reactions Innovations beaver in Green Pumpkin, and Tim caught their largest fish (largemouth) on a Dirty Jigs Canterbury Craw Jig. They also used a Strike King 5 XD Crankbait in Sexy Shad. 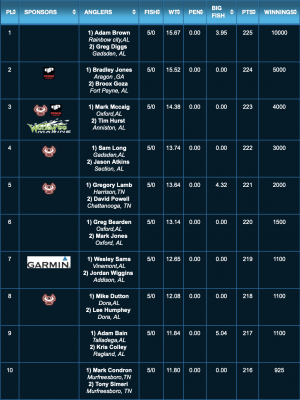 Down Imaging Triumphs During Pre-Spawn Bite