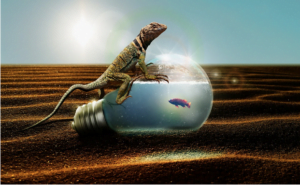 Many individuals utilize aquariums as cages for their pet lizards since they are easily accessible. Despite their popularity, aquariums are not the best enclosures for lizards, especially the bigger ones. However, they can work well as a home for smaller lizards, turtles, and snakes.

Can Lizards and Fish Coexist?

Many lizards, including bearded dragons, anoles, and geckos, can coexist peacefully with fish in tanks if set up correctly.

Food Habits of Lizards and Fish

Many pet lizards, including leopard geckos, house geckos, and anoles, are insectivores – which means they consume insects and other invertebrates. Small insects like flies, crickets, ants, moths, and grasshoppers are all that these lizards seek in the wild. They also consume superworms, mealworms, crickets, and roaches which are great sources of proteins.

What Kind of Tank do You Need for A Lizard?

How Long Do Pet Fish Live?

Even though fish have a terrible reputation for having short lives, they can survive for at least three to five years if given the proper care. Some breeds can survive for a decade or more. An example is one of the most popular breeds of pet goldfish, which can grow to eight inches long and survive for twenty years.

How Long Do Pet Lizards Live?

The life expectancy of the small lizards ranges from three to five years. Medium-sized lizards have five to fifteen years. In contrast, giant lizards have a lifespan of up to twenty years.

So, now that we have a basic idea about pet fish and lizards and if they can coexist, let us learn how to create an aquarium environment fit for lizards and fish to coexist in. In other words, let’s find out how to create a terrarium.

Here is how to turn an aquarium into a terrarium where lizards and fish can coexist.

Things You Will Need

Inspect whether or not the lizards can swim back to the slate if they become wet. Most lizards can swim well and float. There should be no obstacles in the way of the lizard swimming, such as air hoses and heating cables. Put them out of the way by gluing them to the glass just above the waterline.

At least seven years should pass before you need to re-glue the slate, even if it is over the waterline. Once they have been attached, avoid touching them, but if you must, apply just a little pressure.

It looks better if the tank’s front is entirely slate-free. On the other hand, Lizards will swim up against the glass and seek refuge in a corner if one side is left without a beachhead. So make sure that each corner has a smooth landing.

Some water level difficulties can be compensated for using a cork bark floating platform. Then, as the water level rises and drops, your lizard will always have a safe place to rest.

The water should be changed more often than a standard tank since the sickness can contain the lizard excrement. A substrate like dirt/chips or water is inferior in many ways to a water-based one. On the other hand, changing them too often causes them to get rancid rapidly, costs a lot of money, and harms the environment.

Build an area where you can choose the appropriate heater for your lizard on an extra thick-sided slate, attaching it, so it does not fall in. The foundation should be glued down with more adhesive. Glued pebbles or a sticker-pad heater can keep the heater from shifting.

Purchase community tropical fish, which are small enough to avoid dragging lizards underwater and lizards that are at ease in the water and will not eat your fish. Many fish, including neon tetras, Corydoras, bettas, guppies, and even certain danios, can coexist alongside lizards and amphibians, including lizards. Goldfish, silver dollars, knife fish, and cichlids, on the other hand, are terrible options! Good Luck!

Online Course How to Use a GPS

How To Use A Tactical Light

How Fishing Can Become Your Favorite Hobby

How To Use A Tactical Light

How Fishing Can Become Your Favorite Hobby