On Saturday, July 23rd, my son Patrick and I had plans to go fishing – living in Alabama, we have a plethora of great lakes to fish and head to Guntersville several times a year.

From reading fishing reports and looking at feeding times, it seemed like the bite would be on early. We left the house that morning around 1:30 AM from the Birmingham area and were in the water, fishing by 3:30 AM. After fishing rip-rap we moved to bridge openings where the fish began to become somewhat active but not like we were expecting. As the morning continued on, we moved out to the main channel and fished around the bridge pilings of the 431 bridge. With no luck there, we tied on a couple of spoons and moved to the ledges near the main channel where several others were fishing.

Around 9:20 AM, our discussions moved from strategy to breakfast options as we continued fishing. My son was on the bow as I was fishing from the rear of the boat. He was operating in a pattern where he would cast from the right side of the boat and work his way around the bow to the left side trying to target schooling fish. 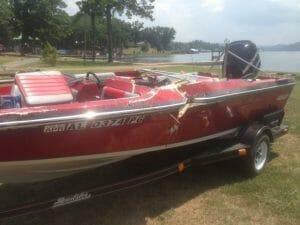 Right around 9:30 AM, he alerted me to a boat he saw off our left side. He said “look at this guy, he looks like he’s coming right at us!” We both began to wave our arms above our heads and even hold our rods up hoping he would see us and be alerted that there was a boat in front of him. Unfortunately, this did not help. My son was now in the middle of the boat as it looked like the boat was coming more towards the bow of our Foxcraft fish/ski.

We realized he was not changing his direction and we were only a moment away from impact. I jumped off the back of boat into the water looking for safety. My son who was in the middle of the boat recalls stepping on to an on-board cooler and jumping out of the boat about a second prior to impact.

He was still in the air when the other boat struck the left side of our boat at 50-55 MPH. As my son emerged from the water, he remembered seeing where I entered the water but had not seen me surface yet. He quickly swam over to my entry point in the water as I emerged. He grabbed my shirt as we began to make our way back to our wrecked boat. 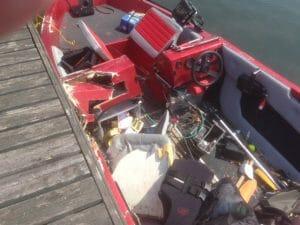 The reason it took me a while to surface was that I was still holding on to my favorite Bill Dance rod I had purchased from Bass Pro a few years ago.

Everything happened so fast I never had time to think about dropping my rod. When we made it back into our boat which was somehow still floating, we realized our boat we had owned for over 20 years was total loss.

The man driving the other boat admitted that it was his fault, 100% and was busy looking at his sonar/GPS looking for another spot fish and was not paying attention to the water or people in front of him. While our boat, which my wife gave to me as a birthday present all those years ago was lost, but fortunately my son and I were safe and able to see family and fish another day.

We hope you will share this story and remind folks that distracted driving also occurs on the water as well. We hate to think what would have happened if he had hit a family that was out riding on the lake or skiing.

Although we don’t know all the names we wish to thank the other boaters that came to our rescue plus the Guntersville Police, Paramedics and Officer Clements of the Alabama Marine Police. 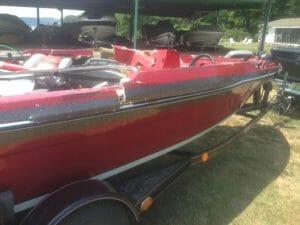 BIG PARTY on the California Delta!

The 2015 Champions of Economic Impact in Sports Tourism

Swindle talks about the game of bass