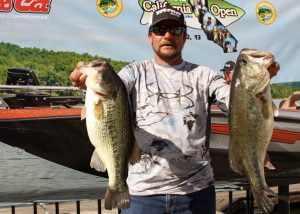 Where big bass abound on a lake where every angler has a shot to win.

LAKEPORT, CALIFORNIA — Bass anglers from around the west will converge on bountiful Clear Lake, California for the seventh annual WON BASS California Open April 10-12, 2019, and the bags are sure to be big. The tournament record winning 3-day weight is 85.60 pounds, set by Wayne Breazeale in 2016. Clear Lake gives up the goods.

The WON BASS California Open is a shared-weight, PRO/AM event with over 100 percent payback. Based on 100 boats, $150,000 is at stake. The Pro Division winner will take home a new Bass Cat Sabre FTD outfitted with a Mercury Pro XS 175 valued at more than $42,500, plus additional prize money.

“It’s an outstanding event. We can’t wait. Conditions should be great. The prespawn situation should be in full swing with big girls on the move and the males up in the shallows. Fishing conditions should be just about every type of bait you can imagine, frogging, spinnerbaiting, dropshot, big baits, everything’s going to be working,” WON BASS Tournament Director Billy Egan says.

Tournament headquarters is at the beautiful Konocti Vista Casino and Marina, where a lodging discount is available for WON BASS anglers through March 8. Bass Cat will offer test rides from 10-4 at the Konocti Vista Marina on Tuesday April 9, registration and mandatory pairing meeting day. The competition kicks off the next day, April 10, with the presentation of the national anthem at 6 a.m.

WON BASS offers three shared-weight PRO/AM Open tournaments every year, the Arizona Open on Lake Havasu, the California Open at Clear Lake, and the legendary U.S. Open on Lake Mead. For more information or to register for a WON BASS tournament, visit wonbass.com or dial (949) 366-0248.

Motel Room in a Bag