The South Carolina angler said he found a spot that had produced a couple 5-pound bass over a few days of practice fishing, so he decided to stick to that area during the tournament.

“I ran straight to that spot on the first day of the tournament, sat the boat on my waypoint and sat there for 8½ hours,” Kelley said. “I relied heavily on my Minn Kota Talon Shallow Water Anchors to hold the boat position steady to target biting bass.”

Kelley said he stayed near a bluff ledge on the edge of a four-foot flat that was holding palm-sized gizzard shad. The baitfish gathered on an underwater point near the steep drop off.

“About every 45 minutes to an hour, I’d throw my topwater up there and the bass would just blow up on it,” Kelley said. “I knew what I was going to be doing for the next two days.”

Kelley said he returned to the same spot on the second day of the tournament, and while the bites were few and far between, they were quality ones. He spent all day picking apart the area with one bait – an Ima Little Stik, a herring-style, pencil-popper bait that Kelley said is popular back home on South Carolina fisheries.

“After the second day when I jumped up to fifth place and left the fish biting, I told my co-angler, ‘Things are about to get interesting,’” Kelley said. “Sure enough, on the last day I had the limit I weighed in by 9:30.”

The top six boaters that qualified for the 2023 Phoenix Bass Fishing League All-American were:

Rounding out the top 10 boaters were: 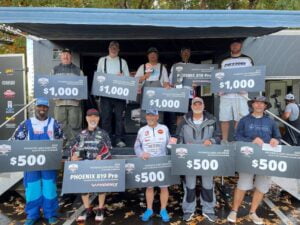 The top four boaters from each division that earned a $1,000 bonus for placing highest in the event were:

Gettys took home an extra $500 as the highest finishing Phoenix MLF Bonus member. Boaters are eligible to win up to an extra $7,000 per event in each Phoenix Bass Fishing League tournament if all requirements are met. More information on the Phoenix MLF Bonus contingency program can be found at PhoenixBassBoats.com.

The top six Strike King co-anglers that qualified for the 2023 Phoenix Bass Fishing League All-American were:

Rounding out the top 10 Strike King co-anglers were:

The top four Strike King Co-anglers from each division that earned a $500 bonus for placing highest in the event were:

The Phoenix Bass Fishing League Presented by T-H Marine Regional Tournament on Pickwick Lake was hosted by the Hardin County Convention and Visitors Bureau. It featured the top pros and Strike King co-anglers from the Bama, LBL, Music City and South Carolina divisions.

The 2022 Phoenix Bass Fishing League Presented by T-H Marine is a 24-division circuit devoted to weekend anglers, with 128 tournaments throughout the season, five qualifying events in each division. The top 45 boaters and Strike King co-anglers from each division, along with the five winners of the qualifying events, advanced to one of six Regional Championships where they are competing to finish in the top six, which then qualifies them for one of the longest-running championships in all of competitive bass fishing – the Phoenix Bass Fishing League All-American.

The top boaters and Strike King co-anglers plus tournament winners from each Phoenix Bass Fishing League division will also earn priority entry into the MLF Toyota Series, the pathway to the MLF Tackle Warehouse Invitationals and ultimately the MLF Bass Pro Tour.

Huff Spoons Up 60 Pounds of Bass to WIN Toyota Opener