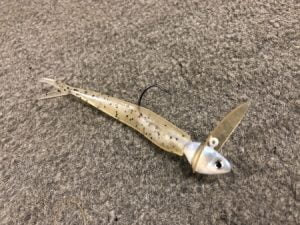 The scrounger jig is an admittedly underutilized bait for most anglers including myself. This is one of the most effective finesse baits that can still be fished relatively quickly. In my recent article about soft-plastic jerkbaits, I mention how a Fluke is a fantastic follow-up bait to a lipless crankbait. Well, a scrounger is basically a marriage of the two.

The scrounger obviously has no rattles. But the semi-hard plastic lip or a scrounger does generate a considerable amount of vibration and offers up a great middle-ground between the aggressive action of a lipless crankbait and the sometimes too finesse action of a Fluke.

This is why a scrounger is perfect for semi-cold water and semi-stained situations, which are both very prevalent in the fall.

What Conditions to Look For 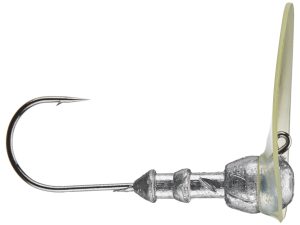 As the water starts to cool a little, it initially affects the behavior of the bait and the bass in a very positive way. Exhausted from the hot, stagnant summer conditions, the first cool snap that drops the water temperature is like a breath of fresh air to everything living beneath the surface. In a matter of hours it seems, shad magically appear in the backs of pockets and along the surface, moving at a very accelerated pace.

And for a brief moment in time, it’s action-packed. You can catch them quick, fast, and in a hurry throwing a wide array of baits. But as that water temps continue to fall, you’ll notice a lot more boiling than busting from the bass. They won’t quite commit to a topwater bait and start feeding subsurface a lot more.

That’s when a scrounger can really shine.

Look For a Change in the Water Color

Likewise, the water starts to get a little more color in the fall. For some areas, rain has been scarce for months. As we start to experience some of the first rains leading into the winter, the water color begins to change from the backs of creeks all the way to main lake pockets. And to this, the sediment stirred up in the water by the fall turnover and you’ll start to see a cloudy green tint in areas that were gin clear a few weeks prior. This too sets up well for the scrounger.

For fall fishing, I prefer a smaller scrounger than those made popular in recent years by ledge fishing hammers like Jason Lambert. Where he pairs a massive 7” Jerky J with a 1-ounce scrounger head, I go with a 1/4-ounce head and an original 4-inch Fluke. The reasoning, he’s trying to mimic the size and action of a big gizzard shad in the summer, where I’m trying to imitate a much smaller, tighter threadfin shad in the fall and winter. It’s the basic equivalent to comparing a number 5 Shad Rap to a 10XD.

The beauty of a scrounger is that it doesn’t require a lot of action. A slow, steady retrieve works best. If you do try to reel it fast, the bait has a tendency to roll. So, if you want to fish the bait closer to the surface, simply raise your rod tip a little.

The bill on most scrounger style baits can rotate 360-degrees around the lead head. This is great for tweaking the bait until you get the desired action and can eliminate the bait’s tendency to roll as much as possible, but also frustrating in that any slight collision with the bill can knock the bait back out of line. So it’s good to add a touch of super glue around where the bill collars around the head once you do get the bait dialed in.

Alaskan-Fishing Slots: Everything You Need To Know

How Hard Is It to Finance a Boat?