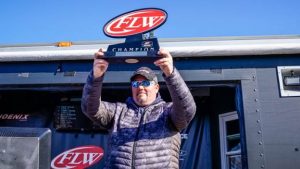 DAYTON, Tenn. (March 1, 2020) – Boater Jim Neece Jr. of Bristol, Tennessee, brought a final-day limit to the scale Saturday totaling 20 pounds, 9 ounces to vault to the top of the leaderboard and win the three-day Toyota Series at Lake Chickamauga. Neece’s three-day total of 15 bass weighing 57-5 gave him the win by a 1-pound, 4-ounce margin and earned him a payout of $40,045 in the Toyota Series Central Division 2020 opener.

Neece left the Dayton Boat Dock Saturday with high hopes. But during the first hour he got worried after only putting one 15-inch bass in the livewell.

“The water came up, and I think the fish just left. They moved shallow,” said Neece. “It completely shut them down. I couldn’t believe it.”

Neece had three areas, all points and breaks on the main river, that he had been fishing consistently. Around 9 a.m. he headed for spot No. 2 near the mouth of Richland Creek. He caught another keeper, and then five minutes later a 4-pounder loaded up on his Zoom Swimmer.

“I calmed down a little after that, but once I got that bite I knew this upper side was going to pay off today,” he said. “I fished two points the rest of the day.”

Neece said that the Zoom Swimmer (chartreuse and blue) was the only bait that he threw all week.

“The only thing I did different is I used an 8:1 gear ratio (reel), which I usually don’t do. It allowed me to keep that swimbait swimming in that current the way it needed to swim. A lower gear ratio wouldn’t allow me to keep up with it,” Neece said.

Neece said patience was also a major factor, especially since he was only fishing two spots.

“My co-angler today got a little frustrated watching me make 50 casts at the exact same spot. But then on that 50th cast I’d catch one.

“I think every 15 to 45 minutes a fish would roll up to feed, and I’d catch it,” he continued. “Then you’d go 15 minutes or even an hour with nothing and then catch another one.”

Neece’s father, Jim Sr., fished on the co-angler side and came in 53rd place. But the elder Neece said it was an incredible experience watching his son climb to the top and hold up the winner’s trophy.

A third generation of the Neece family also fishes competitively. Corey, son of Jim Jr., is a sophomore on the Tackle Warehouse Pro Circuit.

Rusty White of Soddy-Daisy, Tennessee, brought a 10-pound, 15-ounce largemouth bass to the scale Friday – the largest fish weighed by a boater in the event – to earn the day’s Big Bass award of $141.

Seth Davis of Harrison, Tennessee, took home an extra $1,000 as the highest finishing FLW PHOENIX BONUS member. Boaters are eligible to win up to an extra $35,000 per event in each Toyota Series tournament if all requirements are met. More information on the FLW PHOENIX BONUS contingency program can be found at PhoenixBassBoats.com.

Derrick Myers of Corbin, Kentucky, won the Co-angler Division Saturday with a three-day total of eight bass weighing 32 pounds, 12 ounces. For his win, Myers took home the top prize package of a new Phoenix 518 Pro bass boat with a 115-horsepower outboard motor, worth $33,500.

Myers also caught the biggest bass of the tournament in the Co-angler Division Friday, a fish weighing 10 pounds, 12 ounces. He earned the day’s Co-angler Big Bass award of $94.