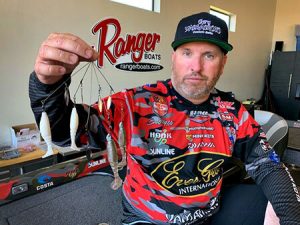 Professional Bass Angler Brett Hite is widely recognized as the foremost vibrating jig expert in the world. The vibrating jig has helped him capture Tour level victories on the Bassmaster Elite Series (Lake Seminole) and the FLW Tour (Lake Okeechobee and Lake Toho).

Several years ago, the Yamamoto Pro set out to create the perfect vibrating jig trailer, one that would require zero modifications and would perform to his exacting standard each and every time. Hite wanted the swimbait trailer to look very natural and to follow, not overpower, the fluid swimming action of the jig. After an extensive period of design and on the water testing, the Yamamoto Zako was born. 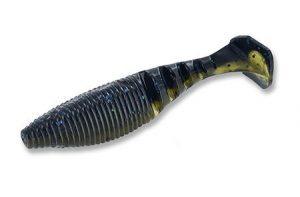 History has affirmed that Hite hit the mark spot on. The Zako has not only become one of the most popular swimbait trailers around but has also played a key role in many Tour level events including Ott Defoe’s win at the 2019 Bassmaster Classic. Soon there will be a new addition to the family, the newly released Paddle Tail Zako.

The original Zako derives its fluid swimming action from the motion created by the vibrating blade. Hite wanted a swimbait trailer with a kicking tail that would add action to a swim jig, an underspin, a swimbait head or a weighted worm hook yet retain the fish-catching attributes of the Zako. He spent the better part of a year working with Ron Colby, Vice President of Operations at Yamamoto on the new bait.

“I had a good idea of what I wanted. I started with the shape and size of the tail — it isn’t round like other paddle tails, it’s more rectangular with a rounded bottom,” explained Hite. “It swims really well and has a nice wiggle action to it. The bait has a big belly and a large profile reminiscent of a bluegill or a big shad.”

The Paddle Tail Zako retains the same pronounced vertical baitfish profile and segmented tail section as its predecessor and its tapered head creates a seamless overall profile. “It fits on a jig head perfectly,” said Hite. “You don’t have to trim it, just thread it on and you’re good to go.”

As good as the vibrating jig is, there are times when the fish become tentative and reluctant to bite it. “When it gets dead slick calm with a higher sky and they just don’t want as much vibration or flash, I’ll switch to a swim jig,” revealed Hite. ”With a swim jig, the trailer needs to produce the motion and the Paddle Tail Zako is the perfect trailer. I fish the swim jig in the same places that I do the Chatterbait; submerged grass, wood, and around docks.”

Hite favors a JDM Evergreen 3/8 or 1/2 oz. Grass Ripper Swim Jig in a green pumpkin or shad pattern to which he affixes a matching Paddle Tail Zako. Unlike with a vibrating jig, the he fishes a swim jig on a graphite rod. He relies on a 7’3” MH action Evergreen Combat Stick paired with a 6:3:1 Daiwa Tatula 100 reel that he spools with 20lb FC Sniper Sunline Fluorocarbon line.

On a recent trip south of the border, Hite matched up the Paddle Tail Zako with an Underspin Jig Head and put a big time beat down on the fish. “I did a bunch of testing this year at Baccarc and I caught a lot of big ones on it,” said Hite. “I like to use anywhere from a 1/2 to 1 oz. head, depending on how deep I am trying to get the bait. I use the same rod and reel setup as I do with a swim jig.”

The Paddle Tail Zako is an extremely versatile bait. It also pairs well with a traditional swimbait head or a scrounger style head. And of course it makes a great trailer for a vibrating jig as well. It is available in ten proven fish catching colors including: Green Pumpkin (297), Electric Shad (973) and Sight Flash (993).

Look for the new Paddle Tail Zako at leading tackle retailers or online today from Yamamoto at our online store.

When Gary Yamamoto Custom Baits officially unveiled the Zako at the 2016 ICAST Show, the fishing world was quick to take notice. Designed by Brett Hite to be the perfect swimbait style trailer for use with vibrating jigs and spinnerbaits, the Zako was an instant sensation. Quietly, members of the Yamamoto Pro Staff had been testing and fishing the Zako with great success for months. Among them was 2002 Bassmaster Champion and FLW Touring Pro, Jay Yelas. Not only was Yelas quick to validate the bait’s value as a

Hite has a BASS Elite Series win (Lake Seminole) and two FLW Tour wins (Toho and Okeechobee) to his credit thanks to a vibrating a jig. Over the years he has perfected every facet of his vibrating jig system except one: the trailer – until now.