With COVID-19 cases on the decline, vaccination numbers on the rise, and summer here, parks and other recreation sites are poised to welcome millions of visitors seeking outdoor escapes over the rest of 2021.

The National Park System, the crown jewels of outdoor recreation sites in the U.S., saw fewer visitors in the spring and summer of 2020 due to public health restrictions that closed or reduced capacity at many parks. But when those restrictions were dialed back, parks emerged as an appealing, safe destination. In the outdoors, people who were eager to travel could get away from home while minimizing the risk of contracting or transmitting the coronavirus. According to research from Kampgrounds of America (KOA), the number of households who identify as active campers grew by 3.8 million in 2020.

But COVID-19 has simply accelerated a trend that has already become apparent in recent years: outdoor recreation, camping, RVing, and similar activities have exploded in popularity across the population. Retirees have long been a major demographic for outdoor travel and tourism, and this has held true as more Baby Boomers retire. On top of that, younger Americans in the Millennial and Gen Z demographics have also been drawn to outdoor recreation as an escape from daily life that promotes physical and mental health and provides unique, exciting experiences. The same KOA study found that Millennials and Gen Z represented 48% of campers last year, a figure that has grown every year since 2015. 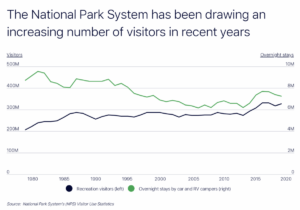 Visitation numbers for the National Park System also bear out the long-term increases in the popularity of outdoor recreation. In 1979, the total number of recreation visitors to national parks was around 205 million, but visitation had climbed to 327 million in 2019, just before 2020’s COVID-induced dip. Overnight stays by car and RV campers had actually trended downward for much of the last four decades, but increased significantly in the few years before 2020. After dropping from a high of 9.5 million in 1981 to lows around 6.2 million in 2013, overnight stays rebounded to top 7 million in each of the five years prior to the start of the pandemic.

One additional factor that contributes to the growth of visitors over that span is the growth in the number of parks. More than 20 new sites have been added to the National Park System since 1980, giving visitors more options in more parts of the United States. States have realized that national parks are a great way to attract tourists and encourage economic activity, which has led some to lobby for additional parks over time. This was part of the motivation behind the most recent addition to the system, West Virginia’s New River Gorge, which was made a national park in December 2020.

The states that benefit most from attracting campers to parks tend to be found in the Western U.S., which also hosts more national parks than other parts of the country. California—home to nine national parks—has the most overnight stays by car and RV campers at around 1.6 million annually. Many of the other leading states are home to iconic sites like Yellowstone in Wyoming (1.1 million), Grand Canyon in Arizona (518,000), and Zion and Arches in Utah (424,000).

The parks themselves also vary in popularity with visitors and campers. To identify which parks attract the most car and RV campers, researchers at Roamly used data from the National Park System’s Visitor Use Statistics, which includes national parks, national recreation areas, national preserves, and national monuments, among other park types. Researchers calculated the average annual overnight stays by car and RV campers at NPS-owned campgrounds as well as privately-owned campgrounds in each park. Researchers also calculated the average number of total overnight stays (including backcountry and lodge stays) and total annual recreation visitors. To improve relevance, data from 2017–2019 was used since total overnight stays and visits declined dramatically in 2020 due to COVID-19.

Here are the most popular national parks for car and RV camping.

For more information, a detailed methodology, and complete results, you can find the original report on Roamly’s website: https://www.roamly.com/learning-center/national-parks-that-attract-most-car-and-rv-campers

Easy to Use Online PDF Editors