In the highlight of his pro fishing career, James Watson of Waynesville, Missouri won the Bass Pro Shops PAA Tournament Series tournament on Table Rock Lake in Branson, Missouri today. Watson, who qualified for his first FLW Forrest Wood Cup championship this year, has been on the FLW Tour four years. He’s also been fishing the PAA Series for four years. Only last year, Watson freed up time from his successful real estate business in order to devote more time to his pro fishing career – and he’s fast becoming a formidable force in pro fishing. 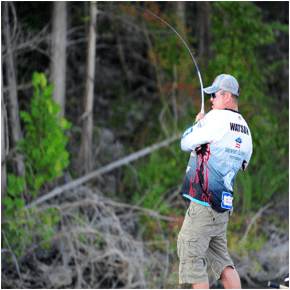 On Table Rock today, Watson struggled through the morning until he flipped his first respectable keeper on a War Eagle Heavy Finesse jig on the shoreward side of a boat dock in only a few feet of water to break the ice around 11 o’clock. Watson wasn’t too fazed by the late bite since 1 o’clock has been when his shallow bite got hot the last couple days anyhow.

For winning, Rick Emmitt of Tracker Marine representing Bass Pro Shops and Nitro Boats awarded Watson the keys to a brand new 2013 Nitro Z8 equipped with a Mercury 225 Optimax (retail value of $36,000). Matt Reed, President of the PAA presented Watson with a $3,000 check for a total first place prize package valued at $39,000.

Long who lives in Willard, Missouri had one miscue and broke off a five-pounder today that cost him the tournament. Long had previously won the PAA event on Table Rock Lake in 2010. He caught seven keepers today. The five he weighed brought Long’s three day tally to 42.02 pounds, only 1.99 behind Watson.

Long fished shallow all day – and throughout the tournament – with a finesse jig. “They would be either behind a boat dock or in a bush, or under a laydown or just in a shady spot.” He caught fish in six inches of water to about four feet at the most.

Long credits his Typhoon sunglasses as his key to the whole week. “I saw close to half the fish that took my bait this week. I would see ‘em and throw over there and catch them.”

His other key was sticking with the finesse jig. “Every fish I weighed came on the jig. It’s a confidence thing for me, and it catches big fish. I just stayed with it all week.” Long used a 5/16 oz. Luck-E-Strike finesse jig in green pumpkin with a little craw on it. “It’s nothing fancy but they eat it,” Long chuckled.

In third place, Casey Scanlon of Lenexa, Kansas had the heaviest limit on Day 3, weighing 15.82 pounds for a three day total was 41.31.

Scanlon fished shallow with a topwater in his hand. He primarily relied on a popper and a frog throughout the event.

Scanlon keyed on two things along the bank. First, small pockets. “The spots holding fish would have something like big boulders or laydowns on them. As the week progressed, I just developed an eye for which ones they might be on, and I ran water looking for those,” explained Scanlon. Second, he fished the shoreward sides of boat docks. “If I came across a boat dock, I’d fish behind the dock and that’s it. I didn’t throw anywhere else. I’d just fish behind the dock and get out of there. That’s basically what I did all week,” revealed Casey.

In fourth place, only 7/100ths behind Scanlon, Jeff Hager of Alexis, NC caught all his fish this week by flipping and swimming jigs shallow.

Other top finishers did concentrate on deep bass for a good percentage of their catches. Stacey King in sixth used a streamlined, pointy-nosed 3Ž4 oz jig to probe snaggy brushpiles from 15 to 25 feet deep. He also used a Jika Rig with a Bass Pro Shops River Bug soft bait. Shin Fukae in seventh place relied heavily on a 10-inch Texas-rigged worm dropped deep into the heart of brushpiles from 20 to 25 feet down. Kelly Power in ninth relied mainly on 3Ž4 oz football jigs to coax quick reaction strikes from bass in clearer water anywhere from 15 to 20 feet deep.

Whether they fished shallow or deep, a good time was had by all in Branson, Missouri this week. Speaking on behalf of all the PAA anglers here this week, we thank the event hosts, Branson Lakes Area Chamber of Commerce and CVB, Bass Pro Shops at Branson Landing and Ramada Branson for their hospitality. The PAA hopes to return to beautiful Table Rock Lake and Branson in the future.

Results for the top 16 pros who fished Day 3 are:

The event paid 16 places. For a full list of pro results visit www.FishPAA.com

Seger said, “I caught it on a Bass Pro Shops Jika Rig with a Bass Pro Shops River Bug soft bait. She was in three feet of water. She jumped out of the water right away, so I knew she was big.  I yelled for my co-angler to get the net, and he scooped her right into the boat!”

Our next and final Bass Pro Shops PAA Tournament Series event for 2013 will be in Grove, Oklahoma in early November at Grand Lake. Make your plans to attend now!

PAA Angler of the Year Race

The PAA pros are also competing for valuable points toward the prestigious PAA Angler of the Year (AOY) title. The AOY title includes stature among their peers and fans by being recognized as the best of the best in 2013 plus free entry into the 2014 PAA Tournament Series and other prizes.

A no-entry fee event with a guaranteed check, the TTBC is the sport’s only true unifying championship. The TTBC pits the top 15 pros from the Bass Pro Shops PAA Tournament Series against the top 15 from the Bassmaster Elite Series and the top 15 off the FLW Tour plus 4 sponsor exemptions and the reigning TTBC world champion Bryan Thrift (for a total field of the world’s top 50 pros).

Bass Pro Shops
• “The Official Outdoor Retailer of the PAA”

Mercury Marine
• “Number One on the Water”

Sign Designs (TNWraps.com)
• “The Official Wrap and Signage Provider of the PAA”

Yamaha
• “The Official Sponsor of the Live Leader Board on FishPAA.com”

Missile Baits
• “The Official Sponsor of the FishPAA.com Photo Galleries”

Grundens Ambassador Makes a Big Splash at the Big O