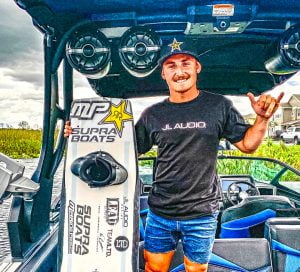 MIRAMAR Flor., – October 16, 2019 – JL Audio, a manufacturer of high performance marine audio systems, announced today they have signed a sponsorship deal with professional wakeboarder and 2019 Supra Boats PWT champion,Nic Rapa. Headed into the 2020 season, Rapa will be representing the JL Audio brand as he strives for more pro championship wins.

Since joining the Supra Boats Team in 2016, Rapa has been using JL Audio products equipped on his Supra SA550. As a professional athlete, Nic is on the water daily, which makes him the perfect advocate for JL Audio and the great products they make.

“Participating in the PWT for the last several years has given us the opportunity to develop relationships with all the amazing athletes that compete – specifically Nic Rapa,” said Bryatt Fischer, Marketing Director, JL Audio. “His professional approach to his craft and loyal fan base speaks volumes for who Nic is, and we are excited to align the JL Audio brand with him going into the 2020 season.”

“I have been immersed in watersports since I was three years old and couldn’t imagine being on the water without music,” said Nic Rapa. “JL Audio is an incredibly influential audio brand and I look forward to working with them to grow as a professional athlete and further expand their impressive influence in the watersports space and marine industry.”

JL Audio has been working indirectly with Rapa since 2016 when he first joined the Supra Boats Team. As the exclusive audio supplier for Supra Boats, Rapa has first-hand experience with JL Audio products. JL Audio has been entrenched in the professional wakeboarding circuit with their sponsorship      of the Supra Boats Pro Wakeboard Tour since 2014. The PWT has served as the stage for      JL Audio      to connect directly with watersports and boating enthusiasts alike to      demonstrating the latest and greatest in marine audio technology. The partnership with Nic allows JL Audio to continue to      support and inspire the next generation of watersport athletes     .

Guided by a philosophy that great audio has real value, JL Audio develops innovative products that improve the audio experience on the go, in the home and in the studio. Committed to unique engineering and quality manufacturing, JL Audio operates three U.S. engineering facilities, and builds many of its home, car and marine loudspeaker products at the company’s Miramar, Florida, USA factory, with components sourced from the company’s global supply network. For more information, visit jlaudio.com or follow the company on Facebook or Twitter.

Ten Ways to Save Money, Energy and Protect Your Health This Winter