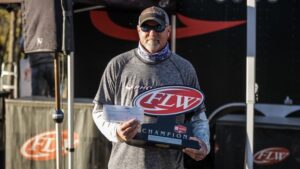 “I’m just blown away,” said Wagner, the 2009 Phoenix Bass Fishing League All-American Champion who earned his 15th career victory in FLW competition. “I got lucky. I just absolutely pulled up dead on top of that school of fish. If that’s not meant to be, I don’t know what to say – It just blows my mind.”

The school of fish Wagner referenced was the “motherlode” he found in the afternoon of day two. He said he didn’t have enough time to pluck a big bag from the school, but he knew he found something special to go back to on Saturday.

“I was pulling up to fish a grass spot [Friday] and I just went across this ditch and [my graph] just lit up,” he explained. “It’s two long, flat points going into a gut of a pocket. There was a school of shad in 49 foot of water, and apparently every largemouth that lives on those points was in that gut.” 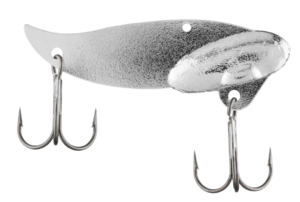 Wagner said he’s not a “deep water guy,” but has the confidence to do something he knows isn’t his forte. He also credits local knowledge and having the right baits on the deck at the right times – namely, a 5/8-ounce Silver Buddy blade bait.

After finding his winning school on Friday, Wagner said he used the Silver Buddy to pluck a few largemouth from deep water to make the top-10 cut. He then went back to his school Saturday morning and caught a couple keepers before hitting a few other spots to give the school time to set up.

Wagner said when he returned, it was game on.

“The shad had ganged up a little better, like the bass had bunched them up a little more,” he explained. “As the day went on it got better. Saturday was fun.”

As much fun as Wagner had both catching the biggest bag of the tournament and holding up the resulting trophy and $62,761 check, he continued to go back to the providence of it all.

MLF 2021 High School Schedule is Out