Crosslake, MN (August 27, 2020) – From an angler’s perspective, sight-fishing for bass or other fish in dingy-water seems like a waste of time. But drop the optics of a high-definition Aqua-Vu camera into the dark abyss and perceptions of water clarity take a surprisingly positive turn.

It’s a tantalizing possibility offered by angling electronics guru Dr. Jason Halfen, who frequently fishes dark-water rivers and reservoirs. “Around the country, we have a lot of stained or dirty water and that’s particularly true of the flowages and reservoirs I fish in the Upper Midwest,” suggests Halfen, owner of The Technological Angler, a topnotch resource for anglers striving to better understand their electronics.

“People often notice I’m running the underwater camera and ask if I’m able to see anything down there. They’re pretty surprised when I show them just how different things look through the Aqua-Vu lens. Until you see the clarity difference, it’s hard to fathom that your eyeballs can only see down a foot, while the camera opens up a whole other world.”

Halfen, who mounts an Aqua-Vu HD7i Pro Underwater Viewing System right beside his sonar, constantly deploys the optics for real-life confirmation, such as structure, cover and fish species ID. “The high-definition Aqua-Vu lens is sensitive to different waves lengths of light than the human eye,” notes Halfen, a university biology professor. “The camera optics feature special light-filtering firmware known as TrueColor Technology, as well as highly refined, lab-quality lenses. The result is a super-clear image on the Aqua-Vu screen—even in dingy water where your eyes might not even see bottom in 2-feet of water.” 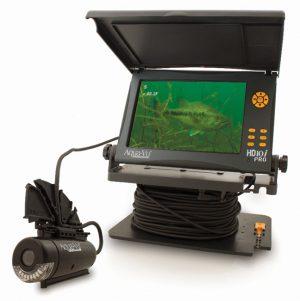 The Original Underwater Viewing System, Aqua-Vu® is manufactured by Outdoors Insight, Inc., and has led the underwater camera category in design, innovation and quality since 1997. The Central Minnesota based company builds other popular outdoors products, such as the iBall Trailer Hitch Camera (iballhitchcam.com). For more information on Aqua-Vu, visit www.aquavu.com.

To benefit from the best underwater imagery, Halfen suggests deploying the camera optics during bright sunny conditions, often during that 10am to 2pm period when the sun reaches its zenith. He notes that while it’s possible to gain a clear underwater view of the terrain down to 12 feet in most daylight conditions, he’s often observed crappies and walleyes down to 24 feet. Fish such as bass, crappies and walleyes show up remarkably well on underwater video—even in dirty water— because their scale-covered bodies easily reflect back into the light-sensitive Aqua-Vu optics.

“At times, the best use of an Aqua-Vu in dirty water is to quickly deploy the optics to examine individual pieces of cover revealed during extensive sonar scans. Spot an underwater crib or brushpile? Drop the camera and you’ll immediately see if anybody’s home. Takes mere minutes. The Aqua-Vu knocks on the door, and big fish often answer, right up close and personal.”

The science of light, says Maschhoff, demonstrates that water absorbs different colors based on depth. Colors with the longest wavelengths, such as red, disappear first, followed by orange, yellow, blue and green, as depth increases and light fades. “By auto-filtering specific colors— based on water conditions— we’re able to project a clean, clear video image—even in stained water.”

That’s good news for anglers, because it opens up dark, mysterious waters that cameras—or even scuba diving—couldn’t previously illuminate.

“In a lot of these stained water rivers and reservoirs, the Aqua-Vu has shown me that fish such as bass, walleyes and crappies really stick close to cover,” Halfen observes. “The Aqua-Vu continues to reveal fish nestled tightly into submerged brushpiles and wood, where sonar can’t always differentiate them. The cover provides a sense of security for the fish, who aren’t at all spooked by the presence of the camera.

“Recently, I dropped the optics into numerous wood snags in 10 to 12 feet of water and found an abundance of walleyes and crappies there. Each time, I’d quickly back the boat away, cast and catch fish—often, the same exact fish that posed in front of the lens. What’s really cool, too, is that I can see if the fish are tucked into the cover or hovering around it, which helps me pick the right presentation. For me, knowing my target species is living there—staying put—gives me a ton of confidence. Underwater video confirmation also lends me the patience to persevere, figure out the right approach and ultimately catch a bunch. Those are undeniable advantages.”

How to Build Positive Reviews about the Business

Essentials You Need For Your Fishing Trip

HOW TO TO KEEP MARINE BATTERIES CHARGED UP

How to join bass fishing team in college

Is a Specific Scope Required for Rimfire Firearms?

Is a Specific Scope Required for Rimfire Firearms?