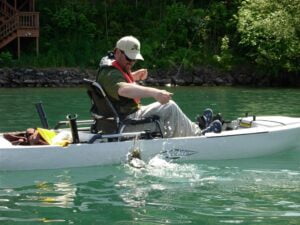 I’ll open by stating that the following information is 100% applicable to internal combustion engine motors, too, albeit not with the exactness of a pedal-powered kayak. Boat speed is better regulated. Turns are tighter. Redeployments quicker. Tackle management superior. And then, of course, there’s the element of exercise, which is kryptonite to some anglers based on visual inspections at the landing.

Once you’ve committed to kayak fishing, the next stage is embracing the concept that trolling is a thing. It is, at least for the most successful of us. Locating fishy spots and casting is the goal, but covering water is sometimes prerequisite to finding those spots. And, oftentimes productive spots are areas, wider swaths – flats, extended breaks, etc. – that hold fish, but not in concentrated schools, rather singles and pods.

Kayak-trolling from a Hobie pedal-driven kayak is an effective year-round technique for myriad species, but we’re entering the peak seasonal timeframe for pulling baits, especially for reservoir bass. Bait is balling up. Gamefish are gathering. And appetites are aplenty.

During the fall, we’re on the cusp of the two most influential moon phases of the year: September 20th’s Full Harvest Moon and October 20th’s Full Hunter’s Moon. You mightn’t believe in Horoscopes or the Easter Bunny, but know that a spike in activity during autumn’s full moons is real, notably for big fish. Records prove it. My personal bests support the fact as well.

Many of America’s greatest bass fisheries are reservoirs. Fish habitat abounds in these flooded habitats, which were formerly valleys, many forested with feeder creeks and ravines. Some including flooded farms and even towns that yield manmade structure. Western and southwestern impoundments are fraught with features, too, including submerged bluffs, rock spines, foothills, and fields.

The combination of these features – especially fertile shallow breeding habitat – with expansive, deep pelagic zones is a boon for baitfish. Shad rule the roost by the zillions. And nothing builds bigger bass than an endless supply of shad.

Shad, too, are the key to unlocking the whereabout of bass. Young-of-the-year specimens are prime for the kill, measuring an edible pinky’s length. In immeasurable numbers, they condense into balls sometimes electronics can’t penetrate. Characteristically, said wads of finned-meat gather over deeper mid-reservoir climes, but usually not far from structure. Main lake points and secondary points, deep humps and former forests are preferred haunts.

If bait activity isn’t visible on the surface, simply pedal from inside depths off points out to the basin and make zig-zag patterns over and around deep humps. And, naturally, have lines deployed during the search process.

The depth of located bait bonanzas is generally influenced by time of day and light conditions. Under grey skies, it’s normal to find them from the surface to 10-feet or so. Same goes for the beginnings and ends of the day. When the sun pops, expect to mark bait deeper than 10-feet, even down to 30. And always be on the lookout for fingernail hooks below the schools. Those are your targets, the bait shepherds.

Bait depth dictates lure selection. This is crankbait and stickbait season, and you need to play a full deck. Carry stickbaits (hard jerkbaits) that run to 6- to 10-feet, crankbaits that like 10 to 20-feet, and a complement of deep-divers when the biomass is deep.

While exploring, I pull a shallow stickbait as well as a crankbait to investigate the middle. Primo stickbaits include Daiwa’s new HMKL Minnow (available late 2021) and Northland Fishing Tackle’s new balsawood #10 Rumble Shiner. Mid-depths are plied with an assortment of Bagley Baits and Northland’s balsawood Rumble Shad.

Staying thematic with forage, shad and natural colors get the call. Moreover, the preponderance of reservoirs are clear to mildly stained, underscoring earthy tones. On the higher-riding stickbait line, that means the 5.4” Daiwa HMKL Minnow in Natural Ghost Shad and Ghost Ayu. The HMKL Minnow is rated to run down to 6-feet, but on braid, and trolled on a long line, you can easily achieve 10-feet. Likewise, trolled, the #10 Rumble Shiner can bust 10-feet.

The same color schemes and depth considerations apply to your mid-depth presentations. Northland’s #7 Rumble Shad will carve beyond 15-feet, and the larger #8 can even find 20-feet. From the Bagley Baits vault, consider the petite Diving Balsa B, which ideally mimics the size of juvenile shad.

Dialing in actual running depths for specific hardbait models is critical, and easily determined. Locate a flat or slow tapering span with a relatively snag free bottom. Sand flats are ideal. Pick a bait, drop it back at least 100-feet behind the kayak and start peddling. Verge deeper until the bill starts grinding the bottom. Take a reading off your electronics. If it says 15-feet, that’s how deep your bait is running with your exact line type and weight on the troll. Pretty simple stuff. Now lock it in your memory or store it in your smartphone.

Time to troll. Get the kayak on a straight troll at or just above 2 MPH, testing speeds for efficacy. Quality electronics, like Raymarine’s Element or Axiom yield precision tracked GPS boat speeds. Release the starboard line, the shallower stickbait, back a minimum of 100-feet. Typically, I go back 150- to 200-feet to mitigate upsetting fish, especially in clearer water and on bright days. Lock it down in your rod-holder and grab number two, the mid-depth bait. Portside, release about the same amount of line, maybe a bit less, as the bait digs faster out of the spook zone.

Let the games begin, eyes fixed to your electronics. Work progressively deeper half-circles off the points, continuously monitoring for shad balls or suspended arcs. Take it out to the basin, and if you remain scoreless, pedal across the mouth of the cove to the next point, lines always in the water. (Reservoir points often come in pairs at the openings of deep coves and creek channels.)

How you manage turns is up to you. In wide, searching turns, you can keep lines in, making the arc big enough to prevent the outside line from crossing the kayak stern and potentially fouling the other line. If the area holds fish, and you want to repeat the run, it’s more efficient to reel up, spin the boat, and restart.

Managing fish is an art. Let’s say the starboard stickbait takes a whack. The resistance caused by the moving kayak is sometimes enough to set the hook, but I always remove the rod from the holder and give it an insurance pull.

It’s decision time. What to do with the secondary line? In my book, there are two options. First, you can drop the rod back in the holder, maintain pressure with modest speed, while quickly reeling up the other line. Or, once you become more skilled, turn the side of the kayak toward the fish and fight it back to the boat while slowly peddling forward. Done properly, the second line stays deployed and out of the fray. Doubles aren’t rare when fish are schooling, either. Indeed, your hands will be full. (I’ll save that technique for my master’s class.)

Let’s assume the stickbait line gets jumped again. Probably time to switch the mid-depth combo over to a shallower presentation. And if things get fast and furious, drop down to one well managed line.

Seeing that kayak trolling is my bread and butter, I wield highly customized gear, especially the rod. Glass is the only way to go. Recently revived and modernized glass crankbait rods are tailormade for kayak trolling. They pull lures with infinite smoothness, the rod perfectly arcing throughout, not only the tip loading up. This fluidness initiates ideal pre-hooksets in the rod holder as the fish is pressured via locomotion, not jerked. Trollers know that fish are lost if strikes are met with stout resistance. 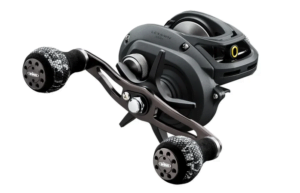 This is not to say that reel selection isn’t important, either. You want quality, reliability and simplicity, but without needing a cosigner. For around $200, the progressively designed Daiwa Lexa WN baitcasting reel is the chosen one. Line unspools cleanly and takes up easily on this aluminum framed reel with an oversized handle. Baitcasting designs are preferred in trolling applications, as they eliminate line-twist, and the Lexa WN’s oversized handle makes for superior grip and leveraged cranks.

You don’t need rods sticking out of your boat like acupuncture for kayak trolling, either. I go to war with four, three identically rigged Mojo Bass Glass/Lexa WN combos and a kicker combo for casting when the surface lights up.

Braid is the word. The glass rod provides all the necessary give, so you can spool with the good stuff. I exclusively fish Daiwa J-Braid Grand x8 in 20-lb. test. Its narrow diameter trolls deep, eliminating the bowing experienced with monofilament. It sinks. It’s strong. And it pairs perfectly with a glass rod. 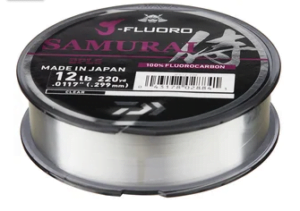 I do, however, recommend tying a long fluorocarbon leader line to maximize invisibility. A 4- or 5-foot section of Daiwa J-Fluoro in 15-lb. test is perfect.

As noted at the onset, reservoir trolling for schooling bass isn’t reserved for kayaks. But for the full experience – boatside battles, oneness with the water, precision maneuverability…and bonus exercise – it can’t be beat.