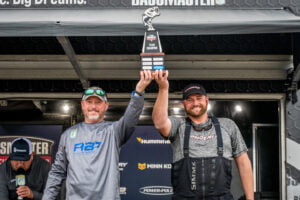 EUFAULA, Ala. — Every time a competing team weighed their fish during Thursday’s final round of the Bassmaster Team Championship, Randy Tolbert and Gary Thompson nodded in approval.

“We’re good,” they told one another, knowing their lead remained intact.

Tolbert and Thompson were good until the end on Lake Eufaula, winning the final tournament of the 2021 Bassmaster season with a two-day total of 10 bass that weighed 28 pounds, 14 ounces.

Tolbert and Thompson, who represent the Alabama Bass Trail, earned a $20,600 cash prize provided by Ranger/Mercury. They also advanced to the Bassmaster Classic Fish-Off, a two-day competition starting Friday that will feature the Top 3 tandems (six individual anglers) competing for the final berth in the 2022 Academy Sports + Outdoors Bassmaster Classic presented by Hukwhich is scheduled for March 4-6 on South Carolina’s Lake Hartwell.

“We had one over 4 pounds on both days and that really helped us,” said Tolbert, who fished the Bassmaster College Series while at the University of Georgia. “And out here this week, that’s a big one. We caught quite a few fish both days, but I really didn’t think we had a shot to win. Coming into today, I was thinking the best we could do is make the Top 3. But when these other guys started coming in, knowing what was out there, we knew we could win it.”

Tolbert and Thompson came into Day 2 tied for ninth with 14-1. A 90-minute delay Thursday because of fog didn’t keep them from posting the heaviest bag of the day – a 14-13 limit that vaulted them to the top of the leaderboard. They took the hot seats early in the weigh-in and remained there until the end.

Thompson said winning the team championship, not to mention having a 1-in-6 chance of making the Bassmaster Classic, seemed like a dream.

“It’s very exciting, but I don’t think it’s sunk in yet,” he said. “I’m surprised I was as calm as I was sitting up there.”

Tolbert said he and Thompson have caught their bass offshore in some of Eufaula’s deepest water.

“We’re using our (Lowrance) ActiveTarget and watching the fish eat the bait a lot of times,” Tolbert said. “To watch a fish follow your bait and know when it’s about to eat the bait, it’s a game changer.”

Shane Powell and Tim Fox, also of the Alabama Bass Trail, finished second with 27-4. Powell, who fished for Auburn University, said he and Fox targeted three or four key areas during the team championship. The native of Dothan, Ala., just south of Eufaula, said experience on the lake helped this week. His team was in seventh place after Day 1 with 14-9 and added a 12-11 limit on Day 2.

“You have to hit them at the right time, but you don’t really know when that is,” Powell said. “You just have to rotate through, go try some new stuff. I know eventually something will turn up.”

Lowery and Murphy also have intimate knowledge of Eufaula, having grown up in the Columbus, Ga./Phenix City, Ala., area just north of Lakepoint State Park, home base for this week’s event. After catching a 15-15 limit on Day 1, the duo caught only three bass Thursday for 10-7.

“We wanted to win it, but Top 3 was the goal,” said Lowery. “I’ll keep flipping jigs and try to go win this thing. I’ve been wanting to fish in the Classic my whole life.”

Each angler in the Top 3 teams qualified for the Bassmaster Classic Fish-Off.

Mark Hogan and Brian La Clair of the Delaware BASS Team Trail won $500 for having the big bass of the tournament — a 6-8 largemouth they hooked Thursday.

A total of 179 teams took part in the Team Championship portion of the event, competing for part of a $91,600 total purse that was divvied among the Top 35 finishers Thursday.

The Eufaula-Barbour County Chamber of Commerce is hosting the Bassmaster Team Championship and Bassmaster Classic Fish-Off.

Shane Powell Wins B.A.S.S. Fish Off and Heads to the Classic

Buddy Gross Averages over 20lbs a day to Win Eufaula