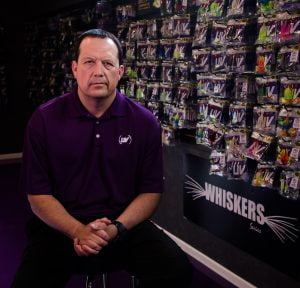 Maryville, MO.–(BUSINESS WIRE) As Tightlines UV Lure Company CEO Brett Ware heads to ICAST 2019, he goes this year knowing he may be more visible to industry leaders than the patented UV technology he developed that’s currently churning a $33 million a year technology curb.

While it is well known across the fishing industry tackle giants continue to copy and feed off of smaller company’s designs partially due to minimal technology advancement in the last 20 years, the giants may have met their match against Ware and his 25 years of Fortune 500 experience. While Tightlines UV may have been developed and originally produced in a garage in America’s fly over country, the man behind the cutting-edge technology has been around the block a time or two.

Ware, a mechanical engineer and former college professor, is leading his Northwest Missouri based company into its tenth year of business; a year where the Tightlines UV brand continues to increase its market share. However, increased sales are not what’s caught the competition’s attention this year. Rather, it’s Ware’s bold move to call out and put several major competitors on notice for patent infringement.

Earlier this year, Tightlines UV Technology LLC made waves in the fishing community when it announced multiple law suits had been filed in United States Federal Courts.

Watch Out … Garmin Has a New Trolling Motor