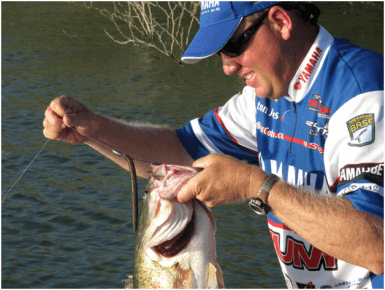 If you call yourself a bass fisherman, you likely know the three basic soft-plastic rigs, the two named after states and the one that’s wacky. What you may be unaware of, however, is that you’re not using them to their full potential. Here are three ways to use those rigs to catch fish and impress your friends.

You think the Carolina Rig is a super-slow technique involving barely noticeable pulls of the rod and pauses long enough to read a chapter of Steven King’s new novel, “Dr. Sleep.” Heck, sometimes your pauses are long enough you actually fall asleep.

There are times when you do need to go slow with this rig, usually during post-front, bluebird days, but bass love a Carolina Rig fished faster than that. B.A.S.S. Elite Pro Terry Scroggins uses a Carolina Rig as a search bait.

“It’s perfect for quickly checking areas,” he said. “I use it a lot during practice.”

Scroggins pulls and pauses, but he uses long pulls and short pauses, until he feels something interesting.

“I’ll let it sit longer when I feel it hit a stump or rock, but usually I’m working it pretty quick.”

Jason Christie, the current No. 1 Angler in the World according to the BassFan World Rankings, used a Carolina Rig during the 2013 season to add to a tournament-winning bag of fish. In that tournament he eliminated the pauses altogether.

“The smallmouth were moving in to spawn and I noticed that every bite I was getting was while I was moving the bait,” he said. “So, I just left out the pauses and used the reel to move the bait. It wasn’t super slow, but somewhere between that and a medium-speed retrieve.”

One problem associated with this rig is that the weight easily slips into cracks and crevices in rocky bottoms. We all know those places, where rocks, wood and all kinds of “junk” on the bottom eat lures for every meal. One fix lure designer Mitch Looper, a big-bass expert with many 10-pound-plus bass to his credit including one of the biggest northern-strain largemouth ever caught, uses to beat this type of “sticky” bottom is to change the weight.

“The reason you get hung in those places is because the weight gets caught,” he said. “I like a banana-shaped weight in those situations, like the Lindy No Snagg. It’s made for walleye fishing, but the bass don’t know that.”

Traditional Texas-rigging normally means bumping a worm or craw off the bottom, or flipping a craw or creature bait into shoreline brush and cover. Like the Carolina Rig, though, the Texas rig doesn’t have to be fished slowly with a lift-and-pause retrieve.

Alabama fishing guide and tournament angler Jimmy Mason uses a Texas Rigged lizard like most people use a hollow-body frog.

“It’s a great alternative when everyone’s throwing frog on the grass mats,” he said. “Rig it with very little weight – just enough to get a good cast – then just pull it along on top of the mats and let it fall a little in any open holes.”

This Texas-Rigged lizard in the grass doesn’t just fit into the Alabama plan, but works everywhere bass get into shoreline weeds, too. One April on a little-fished body of water in Oklahoma, the big females were moving up into the shallow grass to spawn and a weightless Texas rigged lizard worked quickly on top of and through the grass was exactly what they wanted to eat.

While other anglers were slowly pitching tubes or jigs into the weeds, we sped around the area keeping the lizards just at the surface, and landed seven bass in two hours with the smallest weighing more than 5 pounds. With a little practice, you can even get this rig to walk like a Spook on top.

Everyone knows that B.A.S.S. Elite pro Alton Jones is a fan of the YUM Dinger, but he uses it far more extensively than most anglers. Most anglers believe this soft plastic stickbait should only be used weightless in water less than 6 or so feet, but Jones doesn’t hesitate to add a weight as heavy as ¾- or even 1-ounce and fish the Dinger deep, especially when he’s targeting big bass in big-bass waters.

“It’s just as good down deep as it is up toward the surface,” he said. “At Falcon Lake, it’s one of my go-to rigs. It’s a big, fat meal that gets their attention, but it doesn’t move much, so it’s also easy to catch.”

Legendary FLW angler David Dudley fishes a Dinger or Mighty Worm wacky style when bass are in relatively shallow water, but like most fishing geniuses he does it differently than most. The rigging is the same, a hook impaled through the midsection or egg sack area of a straight plastic so that when held by the hook eye, the worm drapes downward on both sides like an upside-down “U.”

Traditional retrieve with a wacky worm is to cast, allow the bait to sink a bit then give it a couple of twitches with the rod tip before letting it sink some more. It’s a tremendously effective retrieve when fishing a vertical structure, such as a dam face, weed edge or against bridge or dock pilings, but the rest of the time, Dudley is fishing it fast to cover water and pick off fish that are relating to sparse shoreline cover. His rod is almost always moving, twitching quickly while he reels in the slack.

“You want the two ends of the worm coming together in almost a clapping motion,” Dudley said. “It’s like it’s saying, ‘You come eat me now or I’m getting away.’”

Another wacky rig modification is to use a finishing nail impaled straight into the tail end. The nail adds a little weight and a different look as it sinks. This works best with a slender, flexible worm like the 6-inch Mighty Worm. The weight pulls that end of the worm down faster than the non-weighted, end, giving fish a totally different look that’s perfect during the post-spawn when bass are guarding fry.

This last modification can make you the hero from the back of the boat. How many times have you spotted a great spot to throw a wacky worm, but you miss it because of the captain’s heavy trolling motor foot? A great solution is to rig a wacky worm Dinger below a small float, either a traditional tear-drop shape or a fly fisherman’s casting bubble.

With this rig, you can cast to the spot and feed out line as the boat moves away, allowing you to slowly and thoroughly fish the spot. Giving the rig a few twitches now and then provides all of the action the rig needs to trigger strikes. Use the longest rod possible and non-stretch braided line to get a good hookset from a distance. 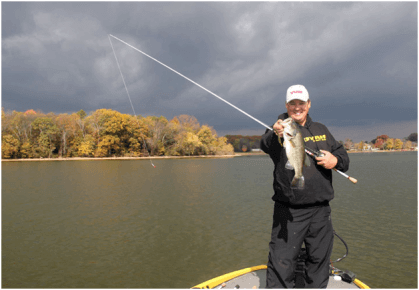