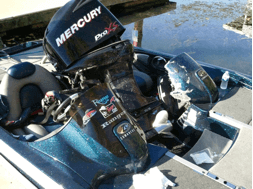 Mike Moreno from Salida CA, now 42 years old, started fishing the local lakes and rivers at the age of 7 with his Father and Grandfathers.  They fished for all types of fish.  His fascination with bass fishing started at an early age when he visited with his neighbor who owned a Bass boat and fished tournaments.  Mike purchased his first boat at the age of 20, a 13.5 foot aluminum boat with a 25hp motor and a 12v electric motor. His custom mounted a pedestal seat on the front deck which he built himself and often fished Woodward Reservoir for bass.  Mike joined his first bass club the Modesto Ambassadors in 1999 where he has served as Secretary, Vice President, and President also achieving angler of the year in 2005. It was during his early years with the Ambassadors that he grew a fascination for trying to figure out the tides in the Delta. It was from that point on that Mike was hooked on tidal water fishing; although an extreme challenge the size of the fish made it all worth trying to figure out the tidal puzzle.

Mike started fishing the California Bass Federation three years ago after meeting and talking with the Federations’ Randy Pierson.  Mike has fished just about every tournament circuit held on the Delta.  He favors TBF for several reasons.  He enjoys the California Bass Federation tournament format and schedule. Mike said, “It is a great group of guys, with awesome camaraderie, and the tournaments draw a large number of boats”.  He also related that, “Ben Willis does a fantastic Job as a Tournament Director”.  Mike has also fished several of the FLW National Guard events and the Stren Series.

Growing up, Mike enjoyed watching all of the fishing TV shows, (like all of us), and knew that he would be a fisherman for life.  Mikes favorite technique is flipping and pitching shallow cover.  Mike favorite time of the year for fishing is in the spring. 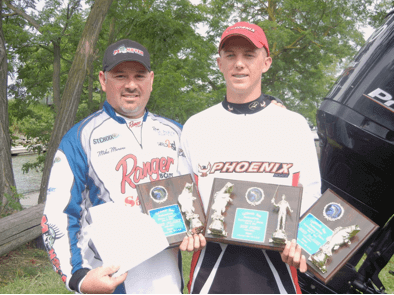 Mike Moreno is one of the nicest anglers around and is a great friend to many.  He and his family are outdoors often, camping, hiking, hunting and fishing.  He has one daughter Mackenzie (10yrs) and three boys, Cadence (14) Michael (14yrs), and Jared (16yrs).  Jared finished 5th place as a in the 2011 Delta Region series. That is quite and accomplishment for his first year of fishing competitively. His wife Deanna encourages and supports the family involvement in outdoors and fishing.  Deanna is often at tournament weigh ins with the family.

On Sept 29, 2011 at 8am Mike and son Jared were pre fishing for the California Bass Federation State Championship on the Delta when they were involved in major boating accident.  The boat struck a large pipe from a Delta construction project that was submerged just under the water while traveling out West on the San Joaquin.  The motor was ripped from the transom and landed in the boat between the consoles running.  Mike and Jared sustained major injuries, involving surgeries, broken bones, and Mediflight. Mike was pinned down by the 600lb motor and luckily able to reach the motors stop button. Jared sustained injuries from the spinning prop.  Mike says to all anglers, “Be prepared; always wear your life jacket with the kill switch attached and you need to have a cell phone for emergencies.” “Be aware, things can happen that are beyond your control”.  Mike and Jared will be recovering at home for the next few months.  When I spoke to him, he eagerly wanted to talk fishing.  We talked about a fishing trip in the spring of 2011 we went on and had 34lbs for 5.  I told him, “Mike, that was one of the best fishing days ever had and I’m glad I was able to share the day with you.” “I had a great time.”

Moreno fishes in a 2008 Ranger Z21 powered by a 250 Mercury motor and is supported by C&C marine and St. Croix Rods. Mikes e-mail: hav2hunt1@charter.net

On behalf of the all of all Anglers, as you rest and heal, know that you and your son are thought of warmly and wished a full and quick recovery.

Save Our Boats – Fix the Ethanol Problem