Crosslake, MN (February 28, 2018) – Who knows how far angling technology will eventually take us? Maybe someone at the CIA has a clue. All we civilian anglers know is that things like GPS and sonar make fishing more productive and efficient, which pretty much defines technology itself.

Beyond the traditional fish-finding tools, underwater cameras add realism and adrenaline to the operation. What’s more electrifying, after all, than actually witnessing the strike, whether through polarized lenses or an Aqua-Vu screen?

Cameras, of course, aren’t just about underwater sight fishing and keeping kids entertained. Advanced underwater cams are equipped with probes that reveal water temperature at the depth you’re actually fishing — often a totally different degree than the surface temp shown on your sonar screen. Ice anglers, for example, are discovering the frequency with which fish flock to warmer pockets amid otherwise near-freezing water. Only way to know for sure is to drop the camera optics, and see for yourself the actual temperature and any fish in the neighborhood.

Another step forward has occurred as enhanced sonar screens now do justice to live color video. Consequently, folks who run video-enabled units — such as Raymarine eSeries or the new Raymarine Axiom Pro — gain the bonus ability to plug their underwater camera right into their sonar screen. 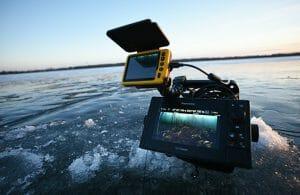 Want to watch sonar and live underwater video at the same time? You got it. Sonar, GPS map and video? Yep. How about capturing still images and underwater video clips for later reference, or to share with friends? That’s possible, too. As is using your underwater camera to visually confirm fish species and the real-life appearance of structure, and then saving the spot as a GPS waypoint — all on the same unit.

While we’re at it, why not just deploy an underwater drone? Apparently, someone out there has nearly perfected a such a device and armed it with fish-seeking sonar, an attached LED lure and 4K video that transmits to a smartphone.

Beam me up, Scotty.

For now, in case you’re wondering about the leading edge of current fish electronics, all we can say is, “Watch this