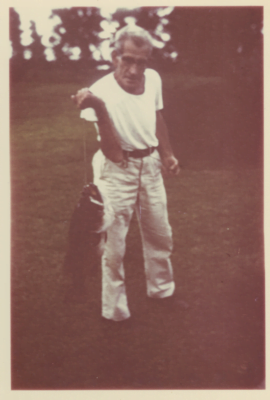 Eugene Fabian fished Cypress Lake in Deland, Florida on an almost daily basis. Cypress is a small enough lake that Fabian could cover the entire lake in a single day, catching a fish here or there. One day over 50 years ago, on August 19, 1963, the then 74-year-old Eugene launched his boat like he had done on any other day. But on his second cast of this fateful day, he felt a felt a solid strike at the end of his line. Fabian set the hook and the fight was on. Thinking it was a small alligator, he took his time reeling it in—almost 30 minutes on the small rod and reel—but when he got it to the surface, he went limp and nearly fell overboard at the sight of a giant bass. This was bigger than anything he or anyone else have ever seen.

After bringing in the fish they measured and weighed it. Its length was 32 inches, girth 24 inches, and it weighed an astonishing 25 pounds, 3 ounces.

This fish eclipsed the world record by an amazing 3 pounds. In recent years we’ve heard stories of 25-pound bass being caught in nets, and Dottie the 25-pound bass that was snagged by accident in California, but this was 55 years ago and caught legally. 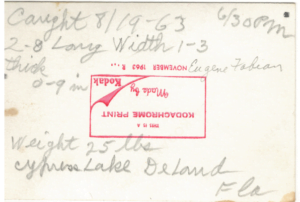 The 22-pound, 5-ounce bass caught by Manabu Kurita measured 29 inches and had a girth of 27 inches. Mr. Fabian’s bass had a smaller girth but that would be expected for a Florida bass in the summertime.

The fish was weighed on a Fairbanks scale and witnessed by 11 people.

Once the story broke, a Florida official was dispatched to certify the catch. However, being unfamiliar with certification requirements, Mr. Fabian had unwittingly cut the fish and put the bass in the freezer which nullified the catch.

The newspaper reported the bass to be 23 inches in length with a girth of 24 inches, but it is believed that this was an error and the bass’s length should have been noted at 32 inches. Now, 50+ years later, we will never know for sure.

Four Eyes are Better Than Two with 360 deg Underwater View