Crosslake, MN (September 30, 2019) – “For true-to-life underwater study, this is the ultimate fish-finding tool,” says scuba diver and host of Hook ‘N Look TV, Kim Stricker. “If I was still fishing tournaments today, I’d be using an Aqua-Vu to scout spots in prefishing, no question,” adds Stricker, who has both Bassmaster and FLW tournament wins to his credit. “Unlike sonar, the underwater camera leaves no stone unturned, nothing open to interpretation.”

Maybe anglers have been paying attention to Stricker’s advice. For this season, prominent tournament competitors have deployed an underwater camera in efforts to positively identify their target species, as well as finding those all-important bigger bass. The results—larger paychecks and bigger bass in the boat— speak for themselves.

Bassmaster Classic 2019 champion Ott DeFoe trusts an Aqua-Vu HD7i Pro mounted in the bow of boat to confirm bass presence in brushpiles, submerged grass, and other heavy cover. This past season, he’s also attached the camera optics to the terminal end of his SuperStick push-pole via a special XD Pole Cam accessory, thereby opening a whole new vista of underwater discovery.

“The pole cam is a really cool device for peeking below boat docks, around bridge pilings or to see beneath matted vegetation,” says DeFoe. “The XD attachment slides right on to the camera and snaps in place, so I can immediately switch between traditional underwater viewing with the XD Trolling Fin and the pole cam. The pole also lets me examine bass on deeper beds, where I can control the angle and direction of the lens at all times.”

On the Bassmaster Elite Series, pro angler Jeff “Gussy” Gustafson notes a similar underwater viewing trend. “At places like Lake Champlain and other clear smallmouth lakes, a lot of anglers use those “Flogger” devices to see bass on beds in 10 to 12 feet of water,” says the Keewatin, Ontario pro. “But what a lot of guys have figured out is that it’s much easier and much less cumbersome to use an Aqua-Vu camera. Some of the guys are mounting the HD camera optics to the base of their trolling motor, and watching the underwater landscape on the LCD screen. You can definitely do the same thing with the XD Pole Cam mount, which gives you total control.

“The deal is, you want to see the size of the bass on each bed, as well as note each fish’s position and activity. Mounting a camera to a telescoping pole is the ultimate way to do this, as most anglers already have a push pole aboard—and more and more of us are carrying an Aqua-Vu, as well.” 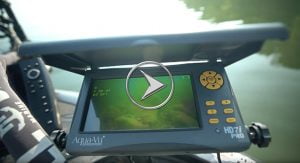 Among those other anglers is Gustafson’s pal and fellow Bassmaster Elite Series angler, Cory Johnston. While Johnston is not sponsored by Aqua-Vu, he still uses the camera anywhere he wants to truly understand the terrain. “On the St. Lawrence River, for example, sonar doesn’t always mark bass on drop-offs—and these are the key spots against which bass can push bait,” says Johnston. “These river bass sit very tight to bottom. The Aqua-Vu HD10i Pro has on-screen water temp and depth, and with the XD Trolling Fin and extra XD weight, you can get down to depth and really get a stable picture of what’s happening.”

At the 2019 Bassmaster Elite Series event on the St. Lawrence, Gustafson—who finished 12th— also relied on his Aqua-Vu. “What worked best for me was to just drop the camera and do drifts through potential river runs,” noted Gussy. “It’s heavy current with large aimless stretches. Every once in a while, you’d spot two or three smallmouths, often 20 to 30 feet in front of the lens. There were plenty of walleyes and drum down there, too, so the camera really prevented me from wasting time fishing for the wrong species.

“The smallmouths often held around little clusters of rock, a sand patch or just a few rocks or a boulder. As I’d drift, I’d drop a waypoint each time I spotted a few smallmouths. Then, I’d go back, drift through each waypoint—mostly in 22 to 45 feet of water—and catch ‘em. Caught several fish on a Ned-rigged Z-Man Hula StickZ. But what also worked great in the strong current was a heavy-duty Carolina Rig with a 60-pound test leader and a Z-Man Turbo CrawZ.” 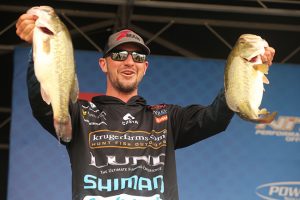 A month later, Gustafson earned $25k and second place at the Bassmaster Elite at Cayuga Lake, New York. Again, his underwater camera proved to be a key fish-finding tool, even while most anglers keyed on much shallower cover. “On the last day of practice, I figured out if you found a single offshore log or rock in about 25 feet of water, there was a good chance you’d have a big bass living there. I drove around and found and logged each little piece of cover with side imaging, and then dropped the camera to confirm bass presence. From there, I dropped a ¾-oz football jig with a Z-Man Turbo CrawZ or a Ned Rig and Hula StickZ and caught some big largemouths and smallmouths. Didn’t catch a ton of fish, but the Aqua-Vu definitely helped put me on the right ones.”

After winning the event, Flaro divulged his game-winning device: “I don’t use sonar like most anglers,” Flaro admitted. “When I’m searching for fish, I use an Aqua-Vu underwater camera one-hundred percent of the time. The only thing I use my graph for is following depth contours and structure on the digital lake map. When I find an important school of fish with the camera, I drop a waypoint.

“It is absolutely the best way to locate and know you’re on tournament-winning schools of bass. In most of these tournaments, I 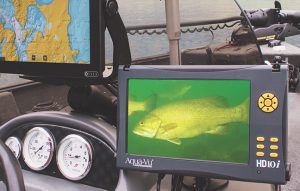 spend all my prefish time scouting with the Aqua-Vu. Sometimes, I never even fish before the tournament starts. On the final prefish day, I check on my fish with a quick drop of the camera and then head right back to the ramp.

“People talk about trusting your electronics,” Flaro adds. “I trust my Aqua-Vu. Sonar can show fish. But the camera reveals the species and size of fish in the area. Gives me confidence and the patience to stay put. Eventually the fish always bite.”

“At a lot of these bass tournaments now, most of my friends are using an Aqua-Vu to find their fish. Anglers are learning that a camera is the absolute secret to uncovering unknown schools of big fish. Amazingly, it’s still somewhat of an overlooked technology, but one that’s given me a ton of fun and fishing success.”

CATCH CENTERS HELP CULTIVATE THE NEXT GENERATION OF ANGLERS