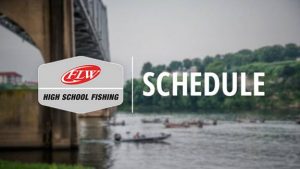 FOR IMMEDIATE RELEASE: BENTON, Ky. (Dec. 5, 2019) – Today FLW (Fishing League Worldwide) announced the schedule, rules and entry dates for the 2020 FLW High School Fishing season. New for 2020, the winning team (two anglers) at the National Championship will both advance to the 2020 FLW Series Championship to compete as co-anglers and fish for the top prize of $30,000, in addition to each receiving a $5,000 scholarship to a school of their choice.

“We are extremely excited to announce our plans for the 2020 season, and I am confident that it will be the most successful High School Fishing season yet,” said Kevin Hunt, FLW Senior Director of Tournament Operations, College and High School. “The fact that both anglers from the National Championship winning team will now advance to the FLW Series to compete as co-anglers alongside some of the top anglers from around the world is a great reward for the young anglers. I’m confident that our High School Fishing anglers will be very excited with this new opportunity.”

The majority of FLW High School Fishing tournaments are held on Saturdays, following an FLW College Fishing tournaments that take place on Fridays. This allows high school anglers the opportunity to network with prospective college fishing teams and coaches to help them decide if and where they would like to start their collegiate fishing career.

Complete rules for the 2020 FLW High School Fishing circuit can be found online at FLWFishing.com.

About FLW
FLW is the world’s largest tournament-fishing organization, providing anglers of all skill levels the opportunity to compete for millions in prize money across five tournament circuits. Headquartered in Benton, Kentucky, FLW and their partners conduct more than 290 bass-fishing tournaments annually around the world, including the United States, Canada, China, Italy, South Korea, Mexico, Namibia, Portugal, South Africa, Spain, and Zimbabwe.

FLW tournament fishing can be seen on the Emmy-nominated “FLW” television show while FLW Bass Fishing magazine delivers cutting-edge tips from top pros. Acquired by Major League Fishing in late 2019, FLW programming expands in 2020 to the Outdoor Channel and the Sportsman Channel as well as on-demand at MyOutdoorTV (MOTV).

Phoenix Boats is now the Exclusive Boat for FLW