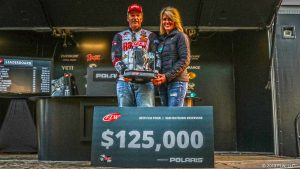 BROOKELAND, Texas (Jan. 14, 2019) – After fishing the FLW Tour for 23 years, competing in his 168th career event, Rapala pro Terry Bolton of Benton, Kentucky, finally got it done. Bolton earned his first career victory in a dramatic final-day weigh-in Monday at the FLW Tour at Sam Rayburn Reservoir presented by Polaris after bringing a five-bass limit totaling 17 pounds, 6 ounces to the scale. Bolton’s four-day total of 20 bass weighing 91-3 earned him the victory by a 12-ounce margin over second-place pro Nick LeBrun of Bossier City, Louisiana, and the $125,000 first-place prize.

“This is pretty big for me,” said Bolton, a 13-time FLW Cup qualifier. “I was going to retire at the end of last year, but my wife talked me into coming back. I didn’t think that I’d ever see this moment and today, it finally happened. This is only 30 years in the making right here.”

Bolton caught most of his fish throughout the event – including his entire 33-pound, 9-ounce Day Two limit – in an area that he described as a drain or void in a grassline. He said the key for him was working his crankbaits at different depths around the grasslines.

“I threw a Rapala DT10 (demon), DT14 (demon) and DT16 (Caribbean shad) to make sure that I could hit the different depths,” Bolton said. “I had one drain that was really special that I found at 3:30 on the last day of practice. I idled across it and saw them all on the depth finder, made two casts and caught a 6-pounder and a 2½-pounder. I left right away and didn’t really know what was there.

“I caught 20 pounds, 10 ounces there the first day and left it at 12:30,” Bolton continued. “Then, I pulled in the next day and got up to 27-28 pounds and was going to leave but I was afraid that a local boat would get in there. I decided to stay and then, lo and behold, I catch the 9-8 and end up weighing in 33 pounds. I don’t know if you call it dumb luck or a good decision, but staying there Friday is what won me this tournament.”

Bolton said that he also mixed in a chartreuse and white-colored ¾-ounce Accent Lures spinnerbait with double-willow blades to catch a couple of keepers throughout the week. He credited his 7-foot, 11-inch Lew’s rod paired with a Lew’s BB1 Pro reel as being crucial to his success.

“That Lew’s crankbait rod and reel combo is truly the best on the planet,” Bolton said. “The key for me was definitely the crankbaits. I had to put the bait just above them in order to get bit.”

Overall there were 49 bass weighing 160 pounds, 6 ounces caught by pros Monday. Nine of the final 10 pros weighed in five-bass limits.

Television coverage of the FLW Tour at Sam Rayburn Reservoir presented by Polaris will premiere on the World Fishing Network (WFN) in 2019. The exact air-date will be announced soon. The Emmy-nominated “FLW” television show airs each Saturday night at 7 p.m. EST and is broadcast to more than 63 million cable, satellite and telecommunications households in the U.S., Canada and the Caribbean on the WFN, the leading entertainment destination and digital resource for anglers throughout North America. FLW television is also distributed internationally to FLW partner countries, including Canada, China, Italy, Korea, Mexico, Portugal, Spain and South Africa.

The total purse for the FLW Tour at Sam Rayburn Reservoir presented by Polaris was more than $860,000, including $9,000 through 65th place in the Pro Division. The tournament was hosted by the Jasper County Development District. The next event for FLW Tour anglers will be the FLW Tour at Lake Toho presented by Ranger Boats, in Kissimmee, Florida, Feb. 7-10. The tournament will be hosted Experience Kissimmee and the Kissimmee Sports Commission.

In FLW Tour competition, the full field of 170 pro anglers competed in the two-day opening round Thursday and Friday. The top 30 pros based on their two-day accumulated weight advanced to fish on Saturday. Competition was postponed on Sunday due to inclement weather, so the top 10 pros continued the competition Monday, with the winner determined by the heaviest accumulated weight from the four days of competition.

Okuma Fills its Reels with a New Line