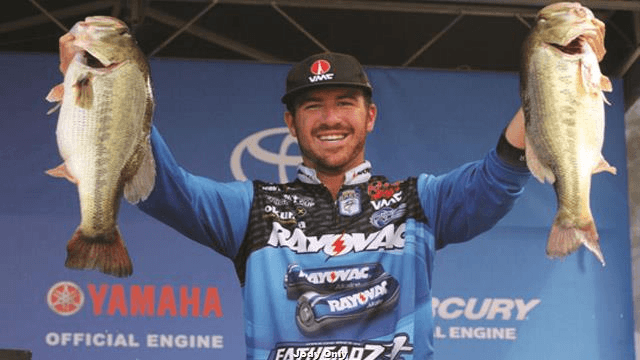 “Topwater is an underutilized tool for cold water conditions, but with the right trends, the winter can be some of the best days to throw it,” said Wheeler.

Wintertime at Wheeler’s mid-western home waters can dip to near freezing, but that doesn’t stop him from fishing the surface. “A topwater lure is not one that you are going to get bit on every day in the winter, but in the right conditions, it can outperform everything else in the tackle box,” he explained. “You want to use it on those days when there is a little bit of a warming trend after a cold spell or when the sun has been shining on the water all day and it perks up the water temp two or three degrees. That warmth will get the fish activated. They start looking up toward the top of the water, the shad get active too and that is when a wake bait is really going to play. Those are prime conditions for this lure.”

He described the optimum times for winter waking as water temps between 48 and 60 degrees in clear water.

Wheeler’s topwater bait of choice for the winter is the Rapala IBX waking minnow. “There are some very specific characteristics that I look for when fishing a topwater lure in the winter,” he said. “The reason why this one is so effective in cold water is because it doesn’t move real fast. It is very subtle.”

TIP: Pick colors that are close to the natural baitfish. Wheeler mainly chooses blue back herring and smelt (a shad type color).

“Ninety percent of the country is going to throw a crankbait or a jerkbait during this season, so if you’re able to throw a wake bait and give the fish something different than what they’ve seen in awhile, you can really get on a good bite,” he advised.

Wheeler fishes his wake bait on points, bluff walls, channel banks, flats around channel banks and bluff ends where it meets a flat.

“The fish are not going to be all the way to the very back of the creeks, but they are probably going to be set up on those areas where they are close to deep water and can move up, eat a few shad and get back down,” he said. “Area with rocks are best because they hold heat.”

When looking for warmer areas, Wheeler also suggested grass flats. “After a couple of warm days the top of the flats with the old dead grass will warm up and you can really catch em on the wake bait there,” he explained. “For flats, I’m usually fishing in 3 to 8 ft. For the vertical structure and channel banks, I can be throwing it over 20 ft of water. When there are warming trends, the fish suspend up, so my boat may be in 30 ft, but he fish are suspended up in 5 or 6 ft, because they’re looking for that warmer water in the top of the water column.”

The key to wintertime waking is a slow presentation and getting the lure to wobble. “When I have the right retrieve, it will wake on top, almost like a shimmy,” he said. “I do this by reeling with a slow but steady retrieve while the rod tip is about 10 to 11 o’clock. I keep the rod tip up to keep the bait up.”

TIP: When reeling the lure in close to the boat, drop the rod trip to about 9 o’clock to keep it in the strike zone longer, before you lift it out of the water.

Distance casting also lengthens the presentation. “A fish will track a wake bait from a long way and you have to give them time for them to come up and get it,” explained Wheeler. “They may track your bait for 10, 20 or 30 ft, so making long casts along this vertical structure or over big flats that are adjacent to deep water will allow the fish to see the lure, track it and also give it time to get to it and hit it. This lure is not really forcing a reaction strike, it is giving them subtle presentation of an opportunity to feed up, because the bait does a really good job at imitating a gizzard shad or another big baitfish meal.”

Wheeler elaborated on the design of the lure. “The reason why this bait will outperform other wake baits is how it is made,” he said. “The BX stands for balsa wood and it is made of balsa, encased in plastic, so you get the buoyancy of a balsa wood wake bait but the castabilty of a lure that is heavier. Before this was available, you had to pick one or the other, balsa or plastic.

He explained the balsa bait would float high, but you could only be cast to a distance of 30 ft on a spinning rod and that the plastic bait would cast far, but wouldn’t wake nearly as well and now he can have the best of both worlds. “There are a lot of guys that would modifications to classic wake baits and now with this option, they don’t have to,” he said. There were some wake baits that people would boil them to make them swell more and be more buoyant or others that would heat the plastic up so that it was pliable and they could turn the bill down. The beauty of this one that just came out this year, is that it is ready to go out of the pack.”

Having the right equipment is critical in the action of the lure. “Normally, with a wake bait, you are going to have to use a spinning rod to cast further, but with the Rapala BX waking minnow, you can cast it with a baitcasting outfit,” said Wheeler.

He throws it on a 7’3″ heavy-action Okuma TCS Scott Martin Signature Series rod with a Helios TCS 6.6:1reel and 15 lb Sufix monofilament line. “I want a rod that is heavy enough, but has a fast action tip so that it is able to cast far enough, but still have and have a little give in the tip for hooking ’em,” he said. A 6.4:1 or 6.6:1 reel will force you to slow down. Even though you’re fishing a topwater lure, you have to remember the fish are still more lethargic than they are in when you’re fishing warm weather topwater, so you have to keep the action slower.”

TIP: Be patient. Even though it is topwater, you’re not throwin a buzzbait or a spook. Take your time, fish it right and in the right conditions and it can pay dividends.

In 2011, Jacob Wheeler was the youngest angler to win the BFL All-American. The same year, he claimed a 12th place finish as he made his first appearance at the Forrest Wood Cup. The following year he had a wire-to-wire at the Cup on Lake Lanier. Most recently, he had a 10th place finish at this year’s Cup on Lake Murray. His FLW career earnings are just under $900,000.