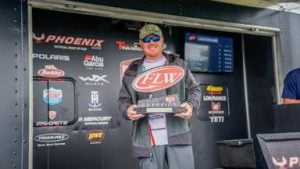 EUFAULA, Ala. (June 6, 2020) – Alabama boater Josh Stracner of Vandiver, Alabama, brought a five-bass limit to the scale Saturday weighing 22 pounds, 3 ounces to win the three-dayToyota Series at Lake Eufaula tournament in Eufaula, Alabama. Stracner’s three-day total of 15 bass weighing 64-15 earned him the win by a 2-pound, 2-ounce margin over second-place angler Ryan Ingram of Phenix City, Alabama, and earned Stracner the top payout of $29,034 in the first tournament of the 2020 Toyota Series Southeastern Division.

This is Stracner’s fourth FLW win on Lake Eufaula – first on the Toyota Series – but midway through the day, it didn’t look like he was going to be able to pull off the come-from-behind victory after starting the day in third place.

Stracner started the day doing what he’d done the previous two days of competition – fishing deep ledges in the mid-lake area. But today, it just wasn’t happening. With 13 to 14 pounds in the livewell and a few hours left to fish, Stracner knew he needed to change up. Eventually, he shifted to fishing shallow brush – in this case 12 to 15 feet deep – which quickly proved to be the right move.

“I did not even think about it moving shallow until about 12 o’clock, and the deep stuff wasn’t working,” Stracner said. “So I went shallow and started catching a few. I caught enough that I just stayed with it the rest of the day. And right before this storm came through, I caught three good ones on back-to-back stops.”

Stracner said that he used about a half-dozen baits throughout the week to catch the winning fish. His main ledge baits on the first two days of competition were a Strike King 10XD and 6-inch Scottsboro Tackle Co. Swimbait on a Scottsboro Recon Head. Saturday, fishing brush, he caught some on a Reaction Innovations Fat Flirt Worm, and a Z-Man ChatterBait.

“I can’t believe it,” Stracner went on to say. “I never really thought I could’ve won it. I was just hoping to stay in second or third. I just had to work real hard this week. You’ve got to be on the right stuff at the right time. Everything’s got to go right, and today was just my day. That’s really all I can say. I feel very fortunate right now.”

Butler took home an extra $1,000 as the highest finishing FLW PHOENIX BONUS member. Boaters are eligible to win up to an extra $35,000 per event in each Toyota Series tournament if all requirements are met. More information on the FLW PHOENIX BONUS contingency program can be found at PhoenixBassBoats.com.

Hank Golden of Tallassee, Alabama, brought a 6-pound, 12-ounce largemouth bass to the scale Friday – the largest fish weighed by a boater in the event – to earn the day’s Big Bass award of $81.

Rob Lyerly of Smyrna, Georgia, weighed in the largest bass in the co-angler division on Thursday, bringing a 6-pound, 7-ounce bass to the stage. He earned the days Co-angler Big Bass award of $54.

The Toyota Series at Lake Eufaula was hosted by the Eufaula Barbour County Chamber of Commerce. It was the first of three regular-season tournaments in 2020 for Southeastern Division anglers. For a complete schedule, visit FLWFishing.com.

WINNERS OF THE INAUGURAL ICAST CUP

Out of the ditch onto the stage