The National ice fishing champions Ryan Wilson and Brandon Newby call it speed-finding. “When we arrive at a new lake, we don’t just look at a map and drill a few holes,” says Wilson. “We use a powerful fishing-searching method that puts us on the best schools of fish.”

If you ask the nine-time North American Ice Fishing Circuit (NAIFC) tournament winners and three-time Team of the Year to reveal how much of the lake they fish, the answer can be a little shocking: “The whole thing,” replies Newby. “Seriously, with tools like our super-tuned ice augers and micro Revolution underwater cameras, we’re often drilling through and spying beneath over 400 holes per day. We couldn’t do that without Aqua-Vu’s Revolution camera reel.” 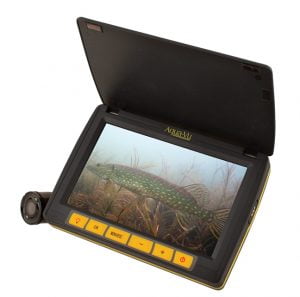 The micro Revolution is Aqua-Vu’s eleventh patent within the underwater camera category it invented in 1997.

The new TurnTable Camera Spooler mounts to the base of any Aqua-Vu HDi Series unit. 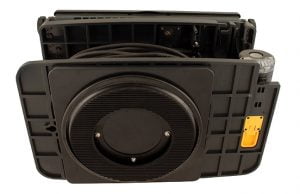 “Both the micro Revolution camera spool and the TurnTable Camera Spooler make underwater viewing faster, more user-friendly and enjoyable than ever,” says fishing electronics professional, Dr. Jason Halfen. “It’s no longer necessary to peel off a bunch of extra camera cable prior to lowering the optics. Instead, you simply pull on the cable to rotate the spool as the camera descends in the water column. The spooler releases as little or as much cable as you need. This little device saves valuable fishing time and ultimately, helps you find more fish.”

At the December 2018 NAIFC National Ice Fishing Championship, Wilson and Newby relied heavily on the clarity and convenience of their Aqua-Vu cameras. “We used sonar a lot, but only the Aqua-Vu showed us what species and size of fish were down there,” notes Wilson. “Same deal for finding those small sweet spots that produce the biggest fish.

“In the tournament, we found a tiny weed clump with the Aqua-Vu that had somehow eluded the other teams. It was loaded with fish. We sat down on it and popped good crappies and bluegills for an hour. The area all around the clump had gotten worked hard by other teams, but this little diamond-in-the-rough produced six key fish and a tournament win.”