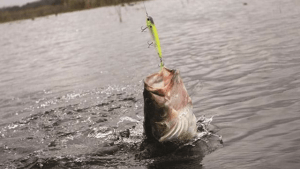 “Winter in the South is a heavy pre spawn and spawn time,” said Martin. “It can depend on how far south you are, but for example at Okeechobee, the spawn is in full effect in January. If you go further north, to the Florida Georgia line, it doesn’t start until late February or the 1st of March. ”

Topwater lures are a top winter choice for southern anglers. Martin’s must-haves are a weedless swimbait made by Bruiser Baits, a Gambler Big EZ or a Reaction Innovations Skinny Dipper.

TIP: Good colors are black/blue, black, bluegill or shad patterns, natural shades like golds or green pumpkin. Experiment to find what is working on a particular day in your area.

“Topwater baits become more effective at 68 degrees or warmer,” he explained. “Further south the temperature is above 68 a lot of the time. If it is below this temperature, I will use the same swimbaits, but I won’t fish them on top. I will stay more subsurface up to a foot down, depending on how tall the grass is.”

TOPWATER TARGETS Depth, hardness and holes are the number one indicators for prime locations. Focusing on spawning flats, Martin seeks out clean water with visibility of at least one or two feet. “You want to use a good pair of polarized glasses, so you can see down to the bottom and see the breaks in the vegetation, active beds, old beds or locked on fish,” he said.

He is also looking for hard bottom. “Not everywhere on grass flats has hard bottom,” he explained. “There are a lot of places that have sediment or silt and these aren’t good areas. Remember, because it is spawning season, the fish are relating to hard bottom.”

TIP: Stick your rod tip down into the water to touch the bottom. When you push against it, you can tell if is hard or if it gives way. If you come up with a bunch of junk on the tip, because it sunk in the mud or has decayed plant material, that is not a good area.

Two to 5 ft is the traditional depth that Martin will find fish. He looks for areas on flats that have open holes in the grass. It can be visible holes or breaks in grass. The holes in the grass can indicate where a fish made a bed and that is good spot. “The holes can be the size of a trash can lid or the size of your boat,” said Martin. “You are also looking for the type of bottom grass that the area holds. I will veer away from areas where there is a lot of hydrilla or moss that carpets the bottom so that there are no breaks in the vegetation.”
Martin also looks for baitfish to find productive areas. “I am always paying attention to what is around me and I want to hear some activity,” he said. “I want to find an area that is alive, whether it is fish feeding on bait or just kickin’ around a little bit. If I’m in an area that is not fertile with lively activity, I am going to make an adjustment to an area with activity.”

WORKIN’ THE TOP Once the target location is found, Martin makes long casts and retrieves at a speed that is just fast enough to cause the bait to gurgle and make nose, while coming across the surface of the water. “Long casts are crucial on the grass flats in the South, because there is so much vegetation, your boat is constantly crashing into it and your trolling motor is hitting it, making a lot of noise. Long casts put your bait farther away from that commotion,” he explained.

TIP: Fish with the wind. Allow it to push and drift your boat, to move forward without making noise with the trolling motor. The wind can also extend a cast across the flat. “My big Okuma flippin stick or my 7’11” Okuma Mat Daddy rod is perfect for long casts and my Okuma TCS 8.1:1 reel is a great match to keep the bait moving at a good clip across the water,” he stated. “The reel’s fast retrieve gathers up a lot of slack to keep the fish moving.” To get maximum distance when casting, Martin uses 65 lb P-Line. “This line is the strongest in its class for diameter,” he said. “It is thinner, but stronger and Teflon coated, so it is extra quiet as it comes through the grass and the guides of your rod.” Martin uses his Power-Poles to hold position, while fan casting. “Looking at the front of the boat as 12 o’clock, I will make a cast to11, 12, 1 and 2 o’clock, maybe even 3 o’clock,” he stated. “Then I Power-Pole up, drift or trolling motor forward to fresh or new water and start the process again.”

GET BIT Watching for movement with the topwater lure, is critical. “There are two ways that fish will hit that bait,” said Martin. “They will either swirl and blow up on it or they will chase it.” During a retrieve, Martin is watching for a wave of water behind the bait to suggest a bass is chasing. “It basically looks like a shark hunting down its prey,” he said. “When I see the wave getting closer, I have to decide if I keep the bait moving or not. Most of the time I do, unless I am about to come through a big patch of grass that could stop the fish from chasing it further.” If faced with the challenge of an obstacle, Martin will completely kill the lure, letting it fall to the bottom, possibly triggering a strike on the fall. “If I can keep the lure moving, I usually will, because I want the fish to chase it down,” he said. “There are times, especially in the spawn, where the fish will only chase it a short ways and then they will stop and go back. If this is happening, I make a follow up cast with the same bait, reeling it back to the same area and the fish will chase it again and a lot of times hit it, again.”

TIP: If the fish repeatedly turns around without hitting the topwater lure, try a follow up cast with a finesse worm or Senko.

ANOTHER OPTION A frog is also a productive topwater lure for the winter in the south. It can be fished in the same areas, using the same casting anglers. Martin frogs with a River2Sea Bully Wa. He will fish the frog when he sees the fish moving, but they aren’t chasing his swimbait. “I will work it in the open holes, kind of fast through the thick stuff and then I will slow it down in the holes,” he said. “I wait and let the fish tell me how fast they want the retrieve, but for the most part, I work it slower when it is cooler, with a pause in the holes of one to two seconds. As the temperature rises to 70 degrees, I am going to keep it moving with maybe a half second pause.”

TIP: A lot of times the fish will miss the bait or slap at it, so don’t forget to wait before you set the hook. When you a blow up make sure the fish has your bait, visibly look for line movement.

As the son of Roland Martin, Scott Martin has grown up in the world of fishing. He has fished for FLW for 14 years as a pro, earning six victories including the 2011 Forrest Wood Cup championship and claiming over $2 million in earnings. Martin regularly launches bass fishing into the nation’s living room with his own nationally televised fishing show the Scott Martin Challenge.

Learn How to Replace a Winch Strap