made history by winning the 2007 Forrest Wood Cup on Lake Ouachita, a title that came with a million dollar payday. He competed on the FLW Tour for 14 seasons, qualifying for seven Forrest Wood Cups. In addition to his victory in 2007, he finished in the top ten in two other Cups, for a total of 17 top ten finishes in FLW competition. He earned nearly $1.9 million with FLW Outdoors, with total career winnings of well over $2 million. Suggs also qualified for and competed in the 2004 Bassmaster Classic and won a Major League Summit Cup in 2015. 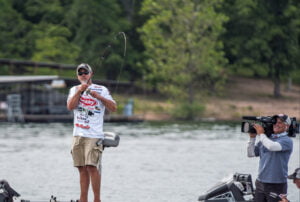 “This is a perfect fit for me,” Suggs said. “I’ve always thought the world of the entire Pierce family. There’s no question about the exceptional quality of the boat and it’s made right here in Arkansas, where the best boats in the industry come from. Relationships are everything in this industry, and now I can get back to that family feeling.”

Bass Cat President Rick Pierce said that he’s known and admired Suggs for decades, and was thrilled to add such an accomplished and fierce competitor to the team. “I’ve watched Scott on and off the water for a long time, and he’s exactly the type of family man we want to be associated with our brand, and I know that he has many strong years left on the Bass Pro Tour.”

Suggs will run a Cougar FTD on tour in 2021. He raved about the boat’s layout, speed and fishability. “It provides the best of everything,” he said. “It’s as stable as any boat I’ve ever been in. The speed is amazing, but it’s really about performance more than speed for me.”

Like Pierce, Bass Cat Pro Staff Director Kevin Short has known Suggs for many years, and competed against him both in Arkansas and on the national tours. He too was thrilled to add his longtime competitor to a pro team that has grown by leaps and bounds over the past year.

“Scott exemplifies the level of professionalism that we need from our staffers,” Short said. “They are our lifeline to the boat-buying public. Not only is he approachable, but his record speaks for itself, and it speaks loudly.”

Cast for a Cure – Bass Tournament