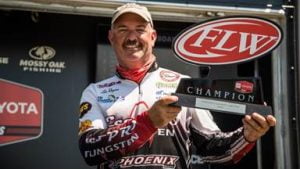 On days one and two, Rogers fished around the islands near Sandusky for smallmouth. Concentrating on a handful of rocky spots on Kelleys Island and the Bass Islands, Rogers caught his smallmouth on a drop-shot rig between 12 and 18 feet deep.

“They were small spots, so it didn’t take long to find the fish on them,” said Rogers. “But there were no numbers; you would just catch one or two.”

For his smallmouth, a drop-shot rig with a Strike King Half Shell did best, and though his primary color was green pumpkin purple, he alternated between a few depending on the conditions. He posted weights of 17-3 and 15-15, to put himself in the top 10 heading into the final day of competition.

On the final day, the field was confined to the area around Sandusky Bay due to strong winds. Starting the day in eighth place, Rogers fished rock piles near and off the bank to catch a 15-10 limit of largemouth bass and rocket up the leaderboard with the biggest limit of the day to earn the win.

“There wasn’t a lot of grass, so I was targeting rock piles,” said Rogers. “I caught some on tubes, and then I switched up to a Texas rig with an Eco Pro Swing Shad. It came through the rocks a little easier, and they started eating that pretty good.”

Rogers used the 3.8-inch size Swing Shad swimbait in a green pumpkin color and a 5/16-ounce weight to do his damage. His tube of choice was a Strike King model with a 3/8-ounce weight, also in green pumpkin. He also added one fish on a spinnerbait fished over some grass on the final day.

“I really didn’t think I would be in contention to win. I just wanted to duplicate day one and get a check. To make the top 10 was a shock. I just can’t believe I won; it’s been a dream of mine since I was a kid,” Rogers went on to say.

Matt Becker of Finleyville, Pennsylvania, took home an extra $1,000 as the highest finishing FLW PHOENIX BONUS member. Boaters are eligible to win up to an extra $35,000 per event in each Toyota Series tournament if all requirements are met. More information on the FLW PHOENIX BONUS contingency program can be found at PhoenixBassBoats.com.

P/aul Kimball of Glastonbury, Connecticut, brought a 5-pound, 3-ounce smallmouth bass to the scale Thursday – the largest fish weighed by a boater in the event – to earn the day’s Big Bass award of $107.

The Toyota Series at Lake Erie was hosted by the City of Sandusky. It was the first of three regular-season tournaments in 2020 for Northern Division anglers. The next event for Toyota Series anglers will be the Toyota Series at Wheeler Lake in Decatur, Alabama. For a complete schedule, visit FLWFishing.com.

An Introduction to Mattress Sizes