The growing popularity of fishing has been well documented in the last two years and one of the fastest growing segments, even before the pandemic, was kayak fishing. There are many reasons for the increased interest, including the lower cost versus purchasing a boat and motor as well as the chance to fish smaller waters and access areas that boats cannot get to.

Two kayak fanatics are the host of The Kayak Fishing Show with Jim Sammons, a show beginning its 13th season on television, and a YouTube personality with nearly 430,000 subscribers, Gene “Flukemaster” Jensen. Both have spent thousands of hours fishing from a kayak and have learned how to stay efficient on the water.

Accessible, But Out of the Way

Sammons has a long-running show dedicated to kayak fishing, but his love for fishing from a kayak spans decades. When he started his journey, the lifelong surfer began taking longboards off the coast of San Diego to fish for calico bass before adapting to the kayaks that were available in the early 1990s.

He’s seen the popularity of kayak fishing grow and the availability of accessories tailor made for the style advance—a significant improvement over the days when he and other kayak anglers had to custom make their own rod holders, mounts, and tackle storage. Even with the advances in gear and kayaks, Sammons has kept the same mantra for fishing gear storage.

“I want things to be accessible but out of the way and that’s something I preached when I was guiding kayak trips and still live it to this day,” he says. “The truth of the matter is kayak anglers are gear junkies and we tend to bring way too much stuff with us, and I’m no different. The key is to have everything organized and out of the way when you are casting, fighting fish, and landing them.”

Sammons has a place for everything on his kayak and has boxes made up for the target species he’s after, whether it is freshwater bass, inshore species like redfish, calico and spotted bay bass, or tuna further offshore. That includes line selection and ensuring he has everything he needs for a day on the water.

“Fishing locally, we might be fishing spotted bay bass close to shore and then move to the calico bass in the kelp beds before going offshore for tuna all in the same day,” says Sammons. “I like to use fluorocarbon leaders and keep a ball bungee cord with all of the spools I may use and keep it on a carabiner hooked to the back of my chair. It keeps my spools nice and organized and easy to get to and out of my way. I also write the pound test on the side with a marker to make it even easier to see.” 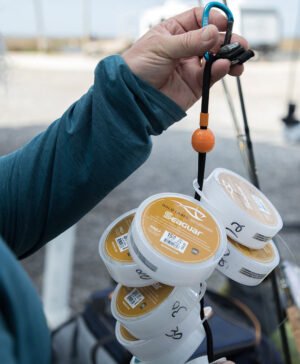 “I like Gold Label because it comes in the small pound tests for spotted bay bass and can go all the way up to 80-pound for tuna,” he says. “The small diameter is such a huge advantage for us anglers. I’ve also had great success with Inshore when we were down in Louisiana fishing for redfish around all of that structure; it’s a great price point and a very strong, abrasion resistant leader.”

“Threadlock is great because you can tie all of your wind on leaders the night before and keep them ready to go,” says Sammons. “It’s so much easier to have a leader you can connect easily with the two loops than it is to tie a connection knot in the waves and wind. I like to run long 20-foot leaders so I can whittle it down after retying until it gets down to four feet or so.”

Many modern kayaks are decked out with the same amenities as bass boats, from high tech electronics and electric trolling motors to shallow water anchors. But, their smaller size requires a downsized tackle selection simply due to limited space.

“With rod holders, I can comfortably carry eight rods in holders behind me and one in front of me,” says Jensen. “But, I generally don’t carry more than six because any more than that and they just get in your way. I choose rods that can do more than one thing instead of highly specialized technique-specific rods. That’s much different than when I’m in my boat and bring 30 or more setups.”

“I have my crate in the back with Plano boxes and some Speedbags for my plastics,” he says. “One thing I do with my soft plastics is to bring bags that are half filled with five of each color because they weigh so much and take up space; that’s an easy way to reduce the tackle you bring. For kayak fishing, you can’t be afraid of leaving stuff behind and in the worst case scenario, you can always go back to the truck to restock. The key is to eliminate clutter and keep everything in the same spot, whether it is your tackle, net, or paddle.”

As someone with years of fishing from the bank, a bass boat, and a kayak, Jensen has learned how to adapt based on where he is fishing. Each requires different casting angles, hookset mechanics, and overall adjustments.

“One good example of that is setting the hook from a kayak since when you set the hook, your kayak goes right towards the fish,” Jensen says. “It’s much different than standing on a boat or shore and to compensate for it; I go up to a heavier rod than I normally would. Instead of using a medium cranking rod, I switch to a medium heavy and always use a little heavier line and one with hardly any stretch.” 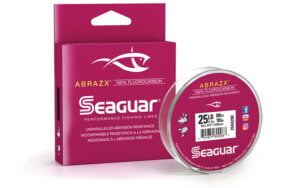 Jensen is a proponent of AbrazX fluorocarbon for most instances due to the low stretch and how he prefers to fish around heavy cover.

“That’s my bread-and-butter line and has everything I want in a line,” he says. “It has great strength and is great when you get into that thick cover. It is also incredibly durable, and I know that if I leave it on a reel for an extended time, it will still perform great.”

Fishing from a kayak takes a different mindset if you are accustomed to fishing from the bank or a boat. It requires more planning and ensuring everything is stored correctly and efficiently, so you only have to worry about catching your next fish.

Getting A New Aquarium? Here Are Some Tips To Help You Out