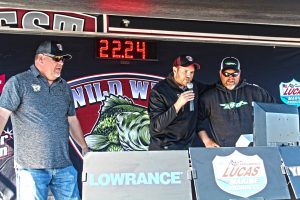 Fishing through a 123-boat pro angler field, the closing moments of the tournament played out with dramatic flair as Remmers took the trophy with a cumulative total of 55.93, just inching ahead of the 55.82 weighed in by runner-up Greg Gutierrez of Redding.

Remmers kicked off the Melones competition with a Day One weight of 17.66, landing his spot in the top-10; however, a Day Two sack of 22.40, bolstered by a double-digit 10-plus, rocketed him into top-spot at 39.90, with nearly a three-pound lead.

With Day Three rumors of a 20-sack being brought in by Gutierrez, Remmers was concerned he may come up short with the 15 that he carried to the scales. In the end, Remmers held just enough for the “W” and a $16,230 payday. His earnings included contingency dollars from Yamamoto, Lowrance, P-Line, Dobyns and a Big Fish payout.

He credits the win to lake knowledge and a willingness to stick to his “big bait” plan. 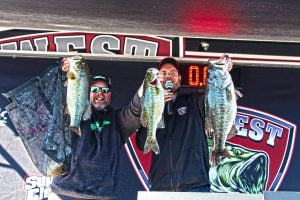 The big lure that he employed was an unnamed swimbait and although his focus was bigger baits, Remmers did reveal he filled out his limits using a soft plastic, as well.

In addition to the secret swimmer, all of his weigh fish fell to a Brush Hog in watermelon candy.

“I fished it on a Texas-rig, when I was around wood and on a football head when I was in open water,” he explained.

His swimbait worked well for the quality vs. quantity strategy he put to work.

“I didn’t want to get caught up in the numbers game, catching 40 or 50 fish that would only get 12 or 15-pounds,” he stated. “I decided to go after big fish and try and hit the jackpot. It worked best on the second day.”

Remmers targeted locations where he felt bigger bass would be transitioning.

“I figured if I could stay in pre-spawn areas, it would set the big ones up better in staging spots for me, rather than concentrating on the ones roaming the banks, looking for a place to bed,” he added. “I think this makes the bass a little bit more predictable.

“The plan kind of worked; but, I only caught three big fish in seven days.”

Remmers focused on colder water run-ins, some vertical structure and less pressured areas for his fish.

“I was looking for the cooler water in the channels and specifically for snow runoff coming into them,” he said. “In most cases, the fish were suspended in 10-feet; but over about 35-feet of water. I think that I caught one that was over 20-feet; but that was a spot.”

To avoid the field pressure, Remmers decided to move up river.

“Down south there was a ton of boats; so, I stayed in the Canyon area,” he said. “I think that helped out quite a bit. I saw at least half of the top-10 up that way sometime during the tournament.”

Remmers hit approximately 10 spots a day, starting in the same place after blast-off.

“I was really just trying to figure out something, besides that morning bite,” he said

Remmers has been fishing for the past 24 years and a competitive tournament angler for most of that time. He is considering a new boat with his winnings.

He expressed his appreciation for Glory Hole Sports hosting the final day’s weigh-in and how dramatic and special that final moment of victory was for him.

REST OF THE BEST | PRO