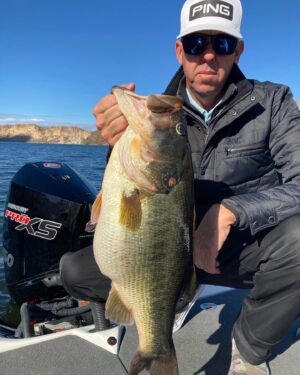 On Monday, while playing a friendly skins game in Phoenix with other golf professionals, including PGA Tour superstar Paul Casey, Hogue hit a hole-in-one on the 163-yard, par-3 seventh hole at Águila Golf Course.
It was – believe it or not – the 9th hole-in-one he has had in his lifetime. Yes, the 9th time Hogue has retrieved his golf ball from the bottom-of-the-cup on a par-3 after striking that ball only a single time.
Then, just the following day (Tuesday), Hogue reeled in a 10.87 pound largemouth bass while fishing with a buddy at Arizona’s Saguaro Lake (see photo with this Facebook post for a photo of Ryan with his monster bass).
The nearly 11-pound bass, which grew large thanks to its habit of inhaling rainbow trout, represented a personal best for Hogue.
“It was definitely an amazing couple of days for me,” Hogue said, adding that he feels like he is closing out 2020 in style.
Like his success on the golf course, Hogue’s success on the lake can be credited more towards skill than luck.
He has always been a phenomenal angler, and he arrived at Saguaro Lake this past Tuesday knowing the biggest bass in the lake had been feeding on rainbow trout.
“My fishing partner and I were committed to only using large swim baits that day, and the bait I used to catch the large bass looked exactly like a rainbow trout,” Hogue said. “It was a very big bait about the size of your average trout.”
Most bass fisherman know that you don’t get many bites when fishing with super large baits, but that when you do get a bite, it’s typically a big bite.
That was obviously the case on Tuesday when the beefy, 10.87 pound bass struck Hogue’s large swim bait with a vengeance.
When Hogue landed the monster bass, it actually had the tail-end of a real rainbow trout still hanging out of its throat.
So, Hogue’s personal record bass inhaled his trout look-a-like bait while not entirely finished swallowing a real rainbow trout.
I interviewed Hogue for this story yesterday and he respectfully refrained from sharing anymore details about how he caught his monster bass such as the exact area of the lake where he caught it, the water depth, and the exact brand of his bait.
“A fisherman should never give up his exact spots or baits in keeping with the fisherman’s unwritten rule and code,” Hogue said with a smile.
Hogue, of Mesa, Arizona, first earned his notoriety as a professional golfer.
The 42-year-old once qualified for and played in The Phoenix Open, and he also performed well in a televised PGA Tour event in Las Vegas a few years ago.
He has also garnered numerous professional golf victories in a variety of mini-tour events.
Hogue later garnered recognition as an exceptional professional golf caddy who was “on the bag” for PGA Tour Player Martin Laird when Laird won this year’s PGA Tour Event in Las Vegas.
Hogue has also caddied for my younger brother, Marty Jertson, in a handful of PGA Tour Events, including the 2020 Phoenix Open and a couple of PGA Championships.
He has also caddied for some of the world’s best female golfers in a variety of LPGA Tour events.
In addition to his golfing, fishing and caddying skills, Hogue is also known as an all-around, down-to-earth good dude.
Have a great 2021 Ryan.
previous post

Mark Zona Gets Rather joins Lews