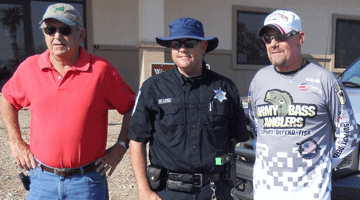 01 December 2010, found ArmyBassAngler Coalition Pro David Burns and fellow angler Vern Price headed out of Callville Bay Marina, Lake Mead, Nevada to take a break from tournament fishing and just spend the day fishing and relaxing.  After about 3 hours of fishing they decided to go to a place called “Sandy Beach” It’s a No Wake Zone and known for holding some very nice bass.  David and Vern were fishing the eastern point into the cove when they noticed a boat traveling at a high speed through the No Wake buoys and into the cove past them creating several large wakes that rocked the boat all over. At that point both anglers decided to continue to fish while observing the 2 people on the boat as they were heading toward the sandy beach.   That is when David made a comment one of the boaters is getting off the boat and is working his way to a large boulder that was located at the water.  At that point David noticed one of the people holding a rope as the boat was backing up to the other side of the cove. That is when both David and Vern thought that they were fishing with a Gill Net. Vern grabbed his cell phone and called the Nevada Fish & Game, however, he was unable to get any cell service. David and Vern continued to fish as David was positioning the boat to get a good look at the boat registration number. That is when David said to Vern that the number cannot be read due to a partially torn first and last letter. At that point David decided to continue to fish as he worked his way to the back of the cove that is when David said to Vern “Check out the fish finder Vern!”  Noticing that the screen showed a huge bait ball in the center of it, they worked their way around the other side of the boat and got the number a wrote it down with a very good description of the boat and the two people on the boat. As they headed toward the outer cove Vern was able to get in contact with the Nevada Department of Wildlife.  David continued to observe with bino’s as Vern was sending in the information.  The two continued to fish and observe as requested by the Department of Wildlife. The boat in the cove started up and was heading out of the cove and towards Boulder Harbor. That is when Vern called again and was told to continue to observe, however, don’t look to obvious. We then let the boat get about ½ miles away is they noticed that it made a hard right and headed into Callville Bay Marina. Vern got on the phone and passed the info on as we headed into the bay David stopped and continued to act as if they were fishing. David observed through the binoculars that the boat was headed to the dock; David started the boat and headed into the entrance to the marina while Vern was on the phone with the department of wildlife.  As they tied the boat onto the dock Vern walked down the dock asking “how did you all do today?, and that is when David moved toward the boat with his camera and took pictures of the boat on the trailer and the vehicle as well as the license plates of both vehicles.  After giving all the info needed to the Nevada Department of Wildlife they were able to get the Game Warden to stop them just as they left the Lake Mead National Recreation Area. They had a total of 109 fish of all species and several gill nets. Both persons were Asian and were cited, the boat and trailer were impounded. In May of 2011 David and Vern were requested to appear in court as witnesses of the state. Both defendants pleaded no contest and were fined $1,000.00 each that had to be paid prior to release. In September 2011 David Burns and Vern Price were awarded each a check for $250.00 for the arrest and conviction of the 2 poachers—HOOAH!

For more information on ArmyBassAnglers and the Coalition visit www.armybassanglers.com

Sportsmen Prefer Products Made in U.S.A., But There’s a Catch