Longtime pro Paul Elias revels at the chance to fish a cold January day. He says that the fish are easily patterned and are near their heaviest this time of year. “January is one of the best months to fish. They’re in a solid winter pattern and when you find ’em, you should be able to catch ’em for six weeks or so,” the Mississippi pro said. Elias recommends you fish deep structure this time of year, as it is most likely to hold chilly bass. Here’s what Elias throws in January.

Mann’s Stone Jig:Elias’ go-to bait this month is a 1/2oz Stone Jig in black and blue. With the tried-and-true bass catcher, Elias targets steep-dropping bends. He dresses it with a complimentary Mann’s HardNose Craw. This is what stays in his hands most of the month. “A jig is going to be your best bet this month,” he says. Elias slowly drags this black and blue package. Pumping and winding can seem unnatural to a chilly bass. Plus, experience tells Elias that bass aren’t willing to chase a fast moving bait, unless it’s presented right in front of them.

Jerkbait:Elias uses the Jackall Squad Minnow SP as his coldwater favorite to probe 5 to 7 foot riprap banks that droop off sharply. “I’ll also use this on the shallow parts of the same points that I throw the jig to,” he says. He likes a purple model with pearl sides and a chartreuse belly. He’ll often swap the hooks out for No. 4 Gamakatsu short shanks. Elias retrieves his jerkbait with varying cadences until he gets a strike, which tells him how the fish want the lure presented. Catching more is a matter of replicating the successful cadence.
Mann’s Depth Plus Crankbait: This deep diver helped Elias set the all-time, four-day weight record on Falcon Lake in 2008. It is what he uses to wreak havoc on bass that are wadded up on ledges adjacent to spawning flats as well as deep creek channel bends. He recommends that you look for fish in 18 to 20 feet of water. “They should be wadded up in a pack this time of year, so you can catch more than one from the same spot a lot of the time,” he says.
Drop Shot Rig: This is what he and many other pros rely on when the going gets tough. Near-frozen bass aren’t the most cooperative, so sometimes light line and medium action rods can save your day. “When the fish aren’t really feeding but I can see them on my graph, shaking this in front of them long enough usually gets a bite,” he says. Elias relies on a 6” Mann’s HardNose Finesse worm in green pumpkin or watermelon red with a 1/0 Gamakastsu short shank hook and 1/4oz weight. 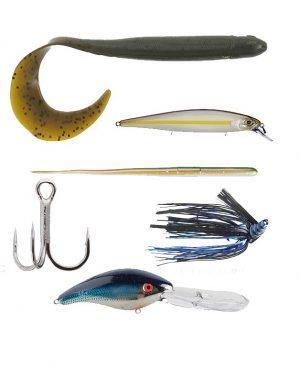 Catching Bass During the Winter Months