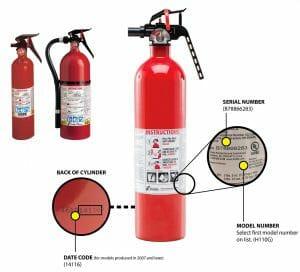 More than 40 million Kidde fire extinguishers equipped with plastic handles, some on the market for more than 40 years, have been recalled. According to the Consumer Product Safety Commission (CPSC), “The fire extinguishers can become clogged or require excessive force to discharge and can fail to activate during a fire emergency. In addition, the nozzle can detach with enough force to pose an impact hazard.” The BoatUS Foundation for Boating Safety and Clean water is urging recreational boat owners to check their boats for the recalled extinguishers and get a free metal-handled replacement by going to the CPSC recall website.

The recall affects both plastic-handle and push-button Pindicator Kidde fire extinguishers, including 134, ABC- or BC-rated models manufactured between January 1, 1973, and August 15, 2017. The extinguishers are red, white or silver and were sold in the US and Canada through a wide range of retailers from Montgomery Ward to Amazon. The CPSC recall website shows how to easily identify the affected extinguishers.

In the recall, Kidde also acknowledged the free replacement push-button extinguisher being sent to personal watercraft owners is similar in size to the recalled model but may not fit in the same location as the old fire extinguisher. “This may require a slightly different mounting orientation or location,” said BoatUS Foundation Assistant Director of Boating Safety Ted Sensenbrenner.”

Kidde may also be contacted toll-free at 855-271-0773 from 8:30 a.m. to 5 p.m. ET Monday through Friday, 9 a.m. to 3 p.m. ET Saturday and Sunday. The company offers additional recall information online at kidde.com by selecting “Product Safety Recall.”

Consumers should immediately contact Kidde to request a free replacement fire extinguisher and for instructions on returning the recalled unit, as it may not work properly in a fire emergency.

Note: This recall includes fire extinguisher models that were previously recalled in March 2009 and February 2015. Kidde branded fire extinguishers included in these previously announced recalls should also be replaced. All affected model numbers are listed in the charts above.

Recall information for fire extinguishers used in RVs and motor vehicles can be found on NHTSA’s website.

The firm is aware of a 2014 death involving a car fire following a crash. Emergency responders could not get the recalled Kidde fire extinguishers to work. There have been approximately 391 reports of failed or limited activation or nozzle detachment, including the fatality, approximately 16 injuries, including smoke inhalation and minor burns, and approximately 91 reports of property damage.

Menards, Montgomery Ward, Sears, The Home Depot, Walmart and other department, home and hardware stores nationwide, and online at Amazon.com, ShopKidde.com and other online retailers for between $12 and $50 and for about $200 for model XL 5MR. These fire extinguishers were also sold with commercial trucks, recreational vehicles, personal watercraft and boats.

Manufactured In:
United States and Mexico
Units:
About 37.8 million (in addition, 2.7 million in Canada)

About the BoatUS Foundation for Boating Safety and Clean Water:

The BoatUS Foundation for Boating Safety and Clean Water is a national leader promoting safe, clean and responsible boating. Funded primarily by donations from the more than half-million members of Boat Owners Association of The United States (BoatUS), the nonprofit provides innovative educational outreach directly to boaters and anglers with the aim of reducing accidents and fatalities, increasing stewardship of America’s waterways and keeping boating safe for all. A range of boating safety courses – including 36 free state courses – can be found at BoatUS.org/courses.

Attempting to Sell Your Boat? These 5 Tips Can Help You Seal the Deal

STRIKE KING HAS A NEW OWNER

GLENN BROWNE SWIMS UP THE RIVER