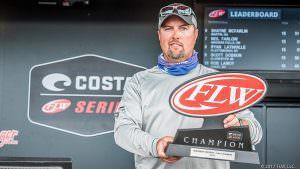 PLATTSBURGH, N.Y. (June 24, 2017) – Pro Ron Nelson of Berrien Springs, Michigan, who started the day in third place, brought a five-bass limit to the scale Saturday weighing 18 pounds, 9 ounces to jump to the top of the leaderboard and win the Costa FLW Series Northern Division event on Lake Champlain presented by Power-Pole. Nelson’s three-day total of 15 bass weighing 54 pounds, 9 ounces, was enough to earn him the win by a 10-ounce margin and the first place prize package worth $93,200, including a new Ranger Z521C with a 200-horsepower Evinrude outboard.

Nelson weighed a mixed bag of three largemouth bass and two smallmouth bass on each of the three days of competition and was the only competitor to surpass the 18-pound mark on Saturday. On Thursday, Nelson started off sight-fishing smallmouths and targeting largemouth later in the day. On Friday, he did the opposite, ditching the early smallmouth and heading to his largemouth grounds. Then, with better weather in the afternoon, the Michigan pro culled twice with smallmouth caught off beds. Saturday, Nelson again targeted the largemouth early, before moving to the bedding smallmouth, then back to the largemouth.

“When I was fishing for the smallmouth I threw an (Poor Boy’s) Erie Darter on a stand-up head jig,” said Nelson, who earned his second career FLW Series event – the first coming on Virginia’s Smith Mountain Lake in 2013. “For the largemouth I threw a Beaver, the Darter and a Yamamoto Senko. It didn’t matter what color I threw, they were biting pretty much anything. I found a couple of largemouth on beds and they were as aggressive as the smallmouth were.

“The Costa FLW Series events are always extremely tough and a lot of fun,” Nelson went on to say. “I enjoy fishing all over the country and the challenge of figuring each lake out. Lake Champlain fishes pretty similarly to my lakes back home and I knew that I was going to be able to come here and just have fun. I was glad just to be in the top 10, but to come out of here with a win is pretty special.”

The top 10 pros on Lake Champlain were:

Kurt Mitchell of Milford, Delaware, caught a bass weighing 5 pounds, 11 ounces Thursday – the biggest of the tournament in the Pro Division. For his catch, Mitchell earned the day’s Boater Big Bass award of $300.

The top 10 co-anglers on Lake Champlain were:

Jason Bezio of Plattsburgh, New York, caught the biggest bass of the tournament in the Co-angler Division Thursday, a largemouth weighing 4 pounds, 9 ounces, and earned the day’s Co-angler Big Bass award of $200.

The Costa FLW Series on Lake Champlain presented by Power-Pole was hosted by the City of Plattsburgh and the Adirondack Coast Visitors Bureau. It was the first of three Northern Division tournaments in 2017. The next Costa FLW Series tournament will be the second Northern Division event, held July 27-29, at 1,000 Islands in Clayton, New York. For a complete schedule, visit FLWFishing.com.