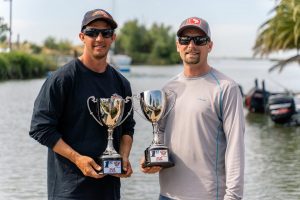 To win the Pro Division, Nourot used a run and gun strategy to cover a lot of ground. He sealed his victory with a perfect 15-fish three-day tournament limit weighing 62.08 pounds. On Day 1, he bagged 22.80 pounds, followed by 17.86 pounds on the second day. He capped off his winning ways with a 21.42-pound bag on the final day of the three-day event. For the victory, Nourot pocketed $14,000. He picked up another $250 in bonus money from Lowrance.

Catching about 15 to 20 fish each day, Nourot caught a 5.5-pounder on a Snag Proof frog on the first day and other fish on a 7-inch Senko in watermelon color. With the Senko, he punched through the grass with a 1.25-ounce tungsten weight. Nourot stayed with the frog and Senko on Day 2. On the final day, he caught most of his fish on the Senko and a drop shot tipped with a 7-inch worm.

On the Amateur side, Travis Williams won with a 15-bass tournament limit going 42.96 pounds. On the first day, Williams brought in 11.21 pounds, but improved every day. He caught 14.88 pounds on the second day and capped off the competition with a hefty 16.87-pound bag on the third day.

Firuz Gizatullin landed in third place among the Amateurs with 38.68 pounds. He landed 10.75 pounds on the first day and followed that with a solid 17.97 pounds the next day. On the final day, he capped his catch with 9.96 pounds to win $2,500.

The anglers will compete again in the trail championship on Clear Lake. The championship tournament will be held May 31-June 2 out of Red Bud Park, located at 14655 Lakeshore Drive in Clearlake. The weigh-in begins at 3 p.m. each day.

The Wild West Bass Trail (WWBT) is the first and only exclusive west coast Pro/Am tournament series to be televised in its entirety. WWBT delivers multiple opportunities to showcase the talents of western anglers on a professional platform, all while providing the highest payback in the industry.

As WWBT continues to provide and refine a platform of elite events for competitive anglers, it simultaneously creates a logical avenue for sponsors to have direct contact with customers. Wild West is dedicated to creating a complete package of advertising opportunities including on-site activation, internet/social media, and television series that reach a large number of viewers each day.