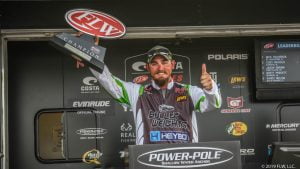 “This feels amazing – one of those things that you lay in bed and dream about at night,” said Thliveros, who was fishing in his 11th career tournament as a boater in FLW competition. “I’ve won fishing as a co-angler before, but to win as a pro in an event that I fished alongside my father is really, really cool. He is an amazing mentor, a heck of a teacher, and I wouldn’t be here today without him.”

Thliveros’ limits weighing 15-14 on Thursday and 19-4 on Friday came from the same area of Lake Okeechobee – the Hendry Canal. He threw a crack-colored Lucky Craft RC 2.0 squarebill crankbait to catch all of his fish on the first two days of competition, an estimated 8 keepers on Thursday and 10 keepers on Friday.

“The key for me was the condition of the lake,” Thliveros said. “I went and found the most stable water that I could find, where the weather and low water wouldn’t affect the fish. That was in the rim ditches, catching fish that were trying to spawn.

“Today, the fish moved up and I couldn’t figure them out,” Thliveros continued. “I only had two little fish on the crankbait this morning, so I had to scrap that whole pattern around 10:45 (a.m.) and just went junk-fishing. I made my way to the back of the Monkey Box and was able to salvage 10 pounds and thankfully that was enough.”

“The rest of the southeastern division events set up really well for me, so I’m excited to see how everything shakes out this season,” Thliveros went on to say. “This was definitely a great way to start the year.”

Casey Warren of Galivants Ferry, South Carolina, weighed a 7-pound, 14-ounce, bass Friday – the biggest of the tournament in the Pro Division. For his catch, Warren earned the day’s Boater Big Bass award of $300.

Andy Niles of Ocean Springs, Mississippi, won the Co-angler Division, a Ranger Z175 with a 115-horsepower outboard motor and $5,000 with a three-day total of 10 bass weighing 40 pounds, 8 ounces.

Gelles caught the biggest bass of the tournament in the Co-angler Division Thursday, a fish weighing 7 pounds, 8 ounces. For his catch, Gelles earned the day’s Co-angler Big Bass award of $200.

The Costa FLW Series on Lake Okeechobee presented by Power-Pole was hosted by Roland & Mary Ann Martin’s Marina & Resort and the Hendry County Tourism Development Council. It was the first of three Southeastern Division tournaments of the 2019 regular season. The next Costa FLW Series tournament will be the Western Division opener, held Feb. 28 – March 2 on Lake Mead in Las Vegas, Nevada. For a complete schedule, visit FLWFishing.com.

FLW is the world’s largest tournament-fishing organization, providing anglers of all skill levels the opportunity to compete for millions in prize money in 2019 across five tournament circuits. Headquartered in Benton, Kentucky, with offices in Minneapolis, FLW and their partners conduct more than 290 bass-fishing tournaments annually around the world, including the United States, Canada, China, Italy, South Korea, Mexico, Portugal, South Africa and Spain. FLW tournament fishing can be seen on the Emmy-nominated “FLW” television show while FLW Bass Fishing magazine delivers cutting-edge tips from top pros. For more information visit FLWFishing.com and follow FLW at Facebook, Twitter, Instagram, and YouTube.

Cox Cranks Up a Win at Rayburn