Bass fishing is one of the world’s most popular fishing sports and in the USA alone, millions of enthusiasts chase bass.  In Australia freshwater Bass fishing is perhaps less well known but that may be about to change.

A young gold coast teenager, Lucy Davis, has just been awarded a coveted world record for her Bass. Her secret spot was the local Coomera River on Queensland’s Gold Coast, where one morning whilst fishing with her dad and brother she hooked it.

At 1.3 kgs in weight her fish was the heaviest Australian Bass. (Percalates novemaculeata) caught by a Junior female angler.

Lucy sent details of her fish to the International Game Fishing Association in Dania Beach Florida USA, along with a section of line, the lure and photographic evidence and around 3 months later received confirmation in the form of a certificate signed by the President of the IGFA confirming her World record.

Fourteen year old Lucy who is a year nine student at the Gold Coast’s Emmanuel College, is a quietly spoken modest girl who brims with enthusiasm when talking about her favorite sport of fishing.

To have a world record under her belt at such a young age she hopes may inspire other girls to ‘have a go’ as she says at this great sport. 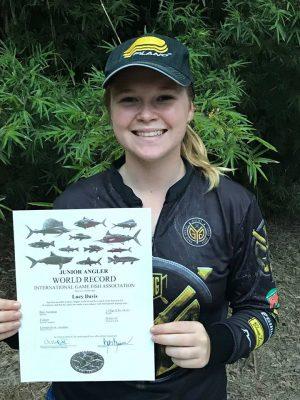 She caught her bass using a hard body diver lure (Rapala) on 10 pound line with a Daiwa gen black rod and a Shimano Stradic 2500 reel.

Maupin Squeaks out a Toyota Series Win on the Potomac