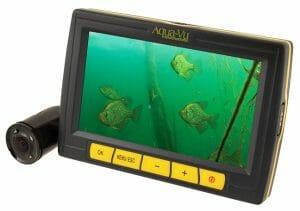 On the eve of the fishing industry’s ICAST show, Aqua-Vu is set to unleash its most affordable, portable underwater camera yet: the micro 4.3 Stealth. Merging major value and dynamic underwater video, the handheld micro Stealth offers nice upgrades without boosting price.

“The viewscreen on the micro 4.3 Stealth screen is noticeably brighter and sharper than our previous entry-level underwater camera,” says Aqua-Vu president Ben Gibbs. “For under $250, anglers can be studying the underwater layout of their lake— and the whole system fits right in their tackle box and in the palm of their hand.”

Beyond the LCD itself, which expanded from 3.5- to 4.3-inches, Gibbs notes multiple system upgrades. The camera optics received a substantial boost in resolution, providing greater detail and picture quality, amplifying discernment of vegetation, fish and baitfish down to identification of mussel shells. 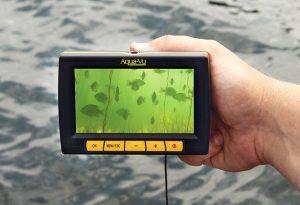 Connecting the Aqua-Vu micro camera to monitor, 50 feet of ruggedized cable is marked with depth indicators in 1-foot increments for precise deployment. The backside of the display sports an integrated cable wrap for tidy management of extra camera cable.

Standard equipment on all 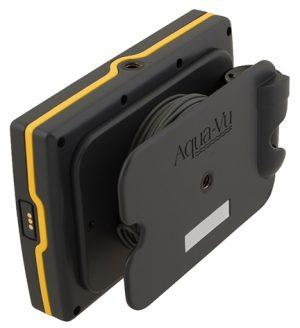 micro 4.3 Stealth systems is an Adjustable Trolling Camera Fin with clip-on ballast weight, as well as a special Ice Fishing Camera Clip for hardwater use.

“To verify what I’m seeing on sonar, I mount my micro Stealth camera right in the console of my boat,” says Aqua-Vu pro, Brian Brosdahl. “The monitor has a female coupler that I connect to a portable Pro Snake mount—clamps anywhere I want it, right beside my sonar screens. Aqua-Vu is just as valuable in my boat as it is in my ice fishing house.”

Getting Fat Bass In Skinny Waters