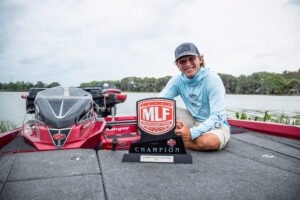 LEESBURG, Fla. (March 18, 2021) – Boater Jordan Thompkins of Myrtle Beach, South Carolina, brought five bass to the scale Thursday weighing 18 pounds, 3 ounces to go wire-to-wire and win the Toyota Series presented by A.R.E. at the Harris Chain of Lakes. Thompkins weighed in 15 bass over three days of competition totaling 65 pounds even, besting second-place boater Willy Dennison of Willoughby Hills, Ohio, by 12½ pounds. For his victory, Thompkins earned the top payout of $40,000 in the second tournament of the 2021 Toyota Series Presented by A.R.E. Southern Division.

“I can’t even hardly think straight right now – I’ve had probably one hour of sleep over the past two nights. My heart has been beating out of my chest since I caught the 31-pound limit on day one,” Thompkins said. “This has just been an unreal experience. Waiting in the bag line today, I just kept thinking to myself, ‘When am I going to wake up?’ Everything has just gone right for me this week – it’s been unreal.”

Thompkins has a strong fishing pedigree – his father, Timmy Thompkins, competed on the Tackle Warehouse Pro Circuit for four seasons and has fished in numerous Toyota Series and Phoenix Bass Fishing League events. The 19-year-old Jordan became the fourth pro under 20-years-old to win a Toyota Series event.

“My dad has blessed me with awesome teaching – I’ve learned every piece of information that I know from him,” Thompkins said. “This is all for him. I’ve gotten so much support from everyone back home, it really helped me keep my mind in it and kept me on my game.” 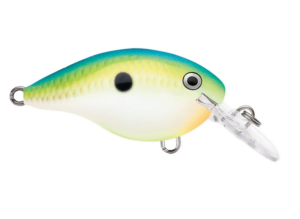 Thompkins credited a Rapala DT-10 crankbait as being his key bait throughout the week.

“I’d never really cranked before in my life – especially in Florida – but when I saw them there and I saw the way the fish were setting up, it reminded me of a couple of different times that I caught them cranking and then when I caught the first one it gave me the confidence to stick with it,” Thompkins said.

“On the first day, it was lights out very quick and I caught the 31 pounds in a hurry,” Thompkins continued. “The rest of the week was a bit of a scramble. I’d start on my first spot and could get a limit in 15 minutes with a jerkbait. That was important because it would help me get my nerves down. Then later in the day I would pick up a ChatterBait and the crankbait and look for the bigger bites. I really just had to run as many high percentage areas as I could, and it worked out. Not very often things like this happen, but every decision I made worked and it’s just been an awesome experience.”

The top 10 pros on the Harris Chain of Lakes finished:

Greico won Thursday’s Berkley Big Bass Award after bringing a 9-pound, 12-ounce largemouth to the scale. The lunker had a special tag attached to it, indicating that it was a part of the Lake Apopka Fish Tag Challenge. The challenge was launched by the Friends of Lake Apopka and the Florida Fish and Wildlife Conservation Commission to further recovery of the state’s fourth-largest lake. When it was originally tagged in January, the bass Greico caught had weighed in at 12 pounds even. The Commission also tagged 499 other fish, including approximately 200 largemouth bass more than 16 inches long, 150 black crappie 10 inches or more and 150 bluegills of at least 8 inches. Potential winnings for catching the tagged fish are more than $10,000. For rules and more information, visit friendsoflakeapopka.org.

The 11th place finisher, Dakota Ebare of Brookeland, Texas, took home an extra $1,000 as the highest finishing Phoenix MLF BIG5 Bonus member. Boaters are eligible to win up to an extra $35,000 per event in each Toyota Series tournament if all requirements are met. More information on the Phoenix MLF BIG5 Bonus contingency program can be found at PhoenixBassBoats.com.

The Toyota Series the Harris Chain of Lakes was hosted by Lake County, Florida. It was the second of three regular-season tournaments in 2021 for Southern Division anglers. The next event for Toyota Series anglers will take place on March 25-27 – the Toyota Series at Lake Texoma Presented by Abu Garcia in Durant & Madill, Oklahoma. For a complete schedule, visit MajorLeagueFishing.com.

The 2021 Toyota Series Presented by A.R.E. consists of six divisions – Central, Northern, Plains, Southern, Southwestern and Western – each holding three regular-season events, along with the International division. Anglers who fish all three qualifiers in any of the eight divisions and finish in the top 25 will qualify for the no-entry-fee Toyota Series Presented by A.R.E. Championship for a shot at winning $235,000 cash, including a $35,000 Phoenix MLF BIG5 Bonus for qualified anglers. The winning Strike King co-angler at the championship earns a new Phoenix 518 Pro bass boat with a 115-horsepower Mercury outboard.

The 2021 Toyota Series Championship Presented by A.R.E. will be held Oct. 28-30 on Pickwick Lake in Counce, Tennessee, and is hosted by the Hardin County Convention and Visitors Bureau.