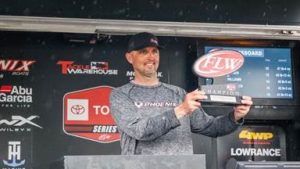 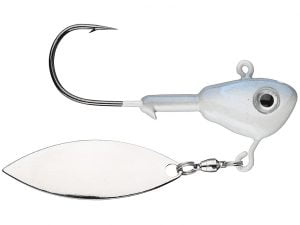 “My main pattern was working the ditches down the lake first thing in the morning,” Robinson told FLW reporters after the event. “I’d hit those with a 3/8-ounce Buckeye Lures Su-Spin and a 1/2-ounce Ballin’ Out jig with a Zoom Creepy Crawler in green pumpkin and get my limit. The bass would hang out in those ditches following the herring after the herring piled in there overnight.”

Robinson’s early-morning ditch pattern held out, just barely, through three days of fishing. He also used the same baits to fish a lot of the secondary points about three-quarters of the way back in the creeks. He found some better fish, too, including a 5-pound kicker largemouth he caught working a couple stretches of docks. He didn’t have to fish under the docks due to the mostly inclement weather that moved across the area for the duration of the tournament and kept fish in the mood to roam a bit and not stick so tight to cover.

While working primarily tributaries on the Georgia side of the lake from Andersonville Island south to the dam, spotted bass began showing up in his bag on days two and three. The spots were mixed in with the largemouth and were hanging pretty close to hard clay and rock bottom.

“I managed to catch my limit in the ditches on the last day, but the bite was dwindling out,” he says. “I found out this morning another boat was fishing those same ditches, so I had to beat them up pretty bad to get a limit today.

“The weather wasn’t ideal and today with the rain and all; it was downright cold,” he said. “The most important thing is I got heated seats in this Phoenix and that come into play. It kept my butt warm and my mind sharp. I’ll tell you something else: The boat ran great. That helps when you get there first and ain’t got to worry about nobody beating you to your hole. That helps a lot.”

As for the rest of his equipment, Robinson had very specific setups for the baits that helped earn him the victory. He used a Castaway Rods Taranis Carbon Extreme 7-foot medium-heavy rod paired with a Lew’s Custom Pro Speed Spool SLP(6.8:1 ratio) reel spooled with 15-pound-test P-Line fluorocarbon to fish the Su-Spin. He worked the Ballin’ Out jig on a 7-foot heavy Castaway Rods Invicta II casting rod with the same reel and line.

“It was great to fish with a lot of my buddies that I grew up fishing against,” Robinson went on to say. “To me, this deal is a little more laid-back. I get to hang out with old fishing buddies I may not have seen in a while and we get to go out to dinner together and just have fun.”

Scott Hamrick of Soddy-Daisy, Tennessee, brought a 7-pound, 14-ounce bass to the scale Tuesday – the largest fish weighed by a boater in the event – to earn the day’s Big Bass award of $95.

Goforth caught the biggest bass of the tournament in the Co-angler Division Friday, a fish weighing 7 pounds, 8 ounces. He earned the day’s Co-angler Big Bass award of $64.

The Toyota Series at Lake Hartwell was hosted by Visit Oconee, South Carolina. It was the first of three regular-season tournaments in 2020 for Eastern Division anglers. The next events for Toyota Series anglers will be a weekend double-header – the Western Division will be opening on Lake Havasu in Lake Havasu City, Arizona, while Southern Division anglers will be competing at Lake Okeechobee in Clewiston, Florida. Both events will be held March 12-14.  For a complete schedule, visit FLWFishing.com.

WHAT HAPPENED TO THE CO-ANGLER PROGRAM

THE WINNER OF FLW SAVANNAH RIVER DIVISION IS CHARLES STORY