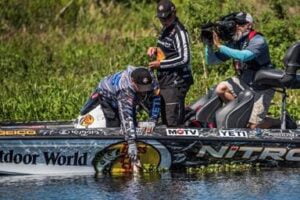 A person reaching for a fish while being filmed for television.

Description automatically generated“It’s clear to us, despite competitors’ claims to the contrary, that Major League Fishing is by far the pre-eminent viewing choice of bass fishing fans wanting to watch top-caliber competition on television,” Major League Fishing President and CEO Jim Wilburn stated. “Numbers don’t lie, and the ratings and viewership numbers back up our claims.”

With more than 1,300 combined hours of television coverage, Major League Fishing, which airs on cable partners: Outdoor Channel, Sportsman Channel, World Fishing Network, Discovery Channel and CBS Sports, has accounted for a staggering 86% of all viewership of competitive bass fishing programs on cable television during the past four quarters (Q3 2019 to Q2 2020).*

During the 2020 season, Major League Fishing has averaged 97,000 viewing households in just its anchor time period on Outdoor Channel, making it the top-rated show on the network for the fifth consecutive year, surpassing the average number of households that viewed its top competitor’s championship series on ESPN2 by +3%, despite its competitor benefiting from nearly triple the distribution.✝︎

Fans of Major League Fishing seek it out regardless of the network including World Fishing Network which is delivering +10% more households than its top competitor’s elite series on Pursuit Channel, despite having just one-seventh of the distribution.✦

About Outdoor Channel: Outdoor Channel has been taking viewers across America and around the world on unparalleled adventures since 1993. Dedicated to the outdoor lifestyle and conservation, the independent cable network is a division of Outdoor Sportsman Group and provides a complete spectrum of riveting hunting, fishing, shooting and adventure entertainment. Outdoor Channel is the largest outdoor TV footprint in the country and is available in more than 50 countries internationally. Outdoor Channel can be viewed in HD and is accessible by broadband and mobile platforms. For program times and other information, visit www.outdoorchannel.com. Follow us on Twitter, Instagram, Facebook and YouTube. #WhatGetsYouOutdoors. #MyOutdoorTV

Simple Tips to Maintain and Use a Personal Locator Beacon

Top 6 Tips That Could Save Your Life in the Wild

Should Boaters Buy an Extended Warranty?