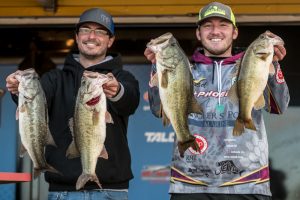 ANDERSON, S.C. — Brad Jelinek and Brock Reinkemeyer found a “magic spot” on Lake Hartwell during practice for the Bassmaster Team Championship and they maximized its potential in the final tournament of the 2019 B.A.S.S. season.

Jelinek and Reinkemeyer, who compete on the Joe Bass Team Trail in Missouri, caught a two-day total of 10 bass that weighed 38 pounds, 10 ounces. Their 23-10 haul was the second-heaviest bag weighed on Thursday, and it propelled them from fourth place on Day 1 to the top of the standings at the conclusion of the Team Championship portion of the event.

The win earned Jelinek and Reinkemeyer a $20,000 Nitro/Mercury cash prize they’ll split. But more importantly, they each have a 1-in-6 chance to fish in the 2020 Academy Sports + Outdoors Bassmaster Classic presented by Huk when it’s held on Lake Guntersville and in Birmingham, Ala. on March 6-8.

The Top 3 tandems in the Team Championship advanced to fish in the Classic Fish-Off, which will be held Friday and Saturday on Lake Hartwell. All weights have been zeroed and the six remaining anglers will fish individually for two more days. The angler with the heaviest two-day total then will earn the 53rd and final berth in the Classic.

In all, 165 duos from 30 different states and two foreign countries competed in the Team Championship.

Jelinek, 25, and Reinkemeyer, 27, were the most impressive tandem during the team portion. They put themselves in the thick of the title hunt on Wednesday with a 15-pound limit, but a few minor adjustments to their strategy supercharged their fortunes a day later.

“We tried to fish for spotted bass on Day 1 and we figured out we shouldn’t be doing that,” Reinkemeyer said. “We had to go for largemouth, and it was all largemouth in the bag today. The biggest was 5-13 and we had a 5-3, too.”

“We got several really good bites today,” Jelinek said. “My partner here executed, and I got a big bite at about 2 o’clock. At that point, I knew we just had to go back in and make sure we were there on time.”

The “magic spot” was vital to their cause, too.

“From the second we put the trolling motor down, we knew it was a magic spot,” Jelinek said. “We knew it was the winning spot.”

“We expanded on it today,” Reinkemeyer added. “We fished it all day. We knew those fish were there.”

Timothy Penhollow and KC Choosakul of the Carolina Bass Trail caught the big bag on Thursday — a 26-8 limit of five bass that dwarfed the 8-13 total they weighed on Wednesday. They were tied for 96th after Day 1, but zoomed to second overall with 35-5 and will fish in the Classic Fish-Off.

The dramatic upsize in the catch came when they downsized their lures Thursday morning.

“We found them in practice, and then we found them again yesterday afternoon, but they were really hard to get to bite,” Penhollow said. “They’re eating minnows that are an inch long, and we just went with it.”

“Honestly, we tied on some crappie jigs,” Choosakul said.

Penhollow and Choosakul had five largemouth on Thursday, the heaviest two weighing 5-12 and 5-10. They bagged three others in the 5-pound range, but missed a pair of kickers, one of which they said weighed 7 pounds or more.

Catching bass that heavy on finesse equipment was tricky, they said. But they think they’ll give the method another go in the Classic Fish-Off.

“A lot goes through your mind when you’re fishing with a little-bitty hook and 8-pound test line,” Penhollow said. “But the bigger fish are there.”

Josh Busby and Timothy Taylor of the Ozark Mountain Team Trail in Missouri placed third overall with 10 bass weighing 31-14. They moved from 16th place to third and kept the dream of fishing in the Bassmaster Classic alive.

“The wind was the difference for us today,” Taylor said.

Anglers fished under cloudy skies with temperatures in the upper 40s on Thursday, but the weather is expected to deteriorate overnight. Rain is in the forecast beginning late Thursday and continuing through the final day of the Fish-Off on Saturday. Temperatures are expected to stick near 40 degrees during fishing hours, too.

Raymond Archer and Kirk Albrecht of the Centennial Bass Club Team Trail in Colorado won $500 for catching a 6-11 bass, the heaviest on Thursday. Adam Smith and Jayme Rampey of South Carolina’s Palmetto Boat Center Team Trail won $500 on Wednesday for their 5-14 largemouth.

Takeoffs are scheduled for 7:15 a.m. ET from Green Pond Landing in Anderson Friday and Saturday. Weigh-ins will take place beginning at 3:15 p.m.

Visit Anderson is sponsoring the event.

Rapala Jumps on Board with BASS

Exciting stuff is going on out here at Yamamoto-land!

Four Tips: How to Safely Truck Your Boat Over the Road