The mere mention of a Rebel Crickhopper lit up Richie Hays’ face as the long-time trout guide remembered the first time anyone threw Crickhoppers from his boat. A guide at Gaston’s White River Resort (www.gastons.com) in north-central Arkansas, Hays took those clients to a shallow shoal where current swept into deeper water, and they proceeded to catch trout after trout by casting across the shoal and reeling slowly so the Crickhoppers wobbled over the drop.

Soon after our conversation, Hays steered his boat to a similar shoal so I could put a Crickhopper to work. It only took a handful of casts to get a feisty rainbow tugging on the line.

Many fishermen use Rebel Crickhoppers for bluegills, pond bass or stream smallmouths, but the same little crankbait also performs exceptionally well for stream trout. Seemingly, the trout have a hard time resisting the wide wobble and the cricket/grasshopper profile.

In truth, various diminutive crankbaits work wonderfully for trout, and they all tend to get overlooked by trout fishermen. A few other baits that stand out are Rebel Tracdown Minnows, Wee-Crawfish and Teeny Wee-Crawfish.

You’ll draw questioning stares from fellow fishermen when you show up streamside with a hard bait tied to your line. Even a small crankbait looks gaudy to a trout fisherman who normally uses flies, spinners or small natural baits such as corn or red worms. That’s OK. You’ll also draw the more important interest – that of the trout – and when you start catching fish, the doubters around you will suddenly become intrigued.

Crankbaits prompt reaction strikes from fish that might study and eventually reject something smaller and slower moving. They also increase your odds of finding large trout that live in a stream, but do so without culling numbers. Additionally, crankbaits offer cast-and-crank simplicity, making them wonderful lure choices even for inexperienced anglers.

Most importantly, casting and cranking and then having fish attack little crankbaits is an extremely fun way to catch trout.

Crickhoppers and slightly larger Bighoppers stay the shallowest of the crankbaits mentioned. The dive just a couple feet when retrieved at a medium, constant speed. As the season progresses and fish start finding more food on the surface, Crickhoppers work well waked on the surface with an extra-slow retrieve, twitched on top or even dead drifted. In a large river like the White, Crickhoppers work best over shallow shoals or fished close to the shore. 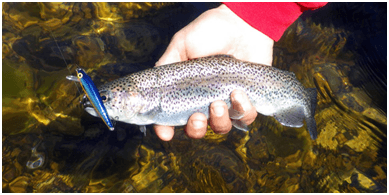 Rebel Tracdown Minnows sink slowly when they are not in motion. That means you can reel right away and keep the rod tip high to work one over very shallow areas, or you can wait several seconds before beginning each retrieve and work the bait with pauses and get it notably deeper. After we worked the shallow White River shoal, Hays took us to a deeper, rainbow-filled run, and a Tracdown Minnow turned out to be the ticket for those fish.

Cranked steadily, a Tracdown Minnow swims with a fairly tight wiggle. Twitched, it darts erratically. As the name suggests, a Tracdown Minnow is minnow-shaped, so it can suggest a minnow, sculpin or even a baby trout depending on the size and color pattern, where you throw it and how you present it. The same basic bait comes in three sizes, which range from 1 5/8 to 3 ½ inches long, and a half a dozen color patterns. 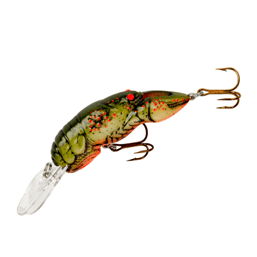 Rebel Wee-Crawfish and Teeny Wee-Crawfish, which are super-realistic crawfish mimics, dive when they are in motion. Often the best way to fish a Teeny Wee Crawfish is simply to cast it and crank it back. It will produce many fish while swimming freely in the current, but can be even more effective over shallow rocky bottoms that you can kick the lure off during presentations.

The Wee-Crawfish handles nicely in current, which makes it especially effective in trout stream situations. In extra-strong current, instead of casting upstream and reeling quickly to outpace the river, cast across the stream and keep the line tight, so the lure dives and swings out into the current.

A friend and I commonly begin a day of stream trout fishing with one of us throwing a Tracdown Minnow and the other throwing a Teeny Wee-Crawfish. Some days, the trout show about the same level of interest in both, so we stick with our guns. More often, though, one bait out-produces the other and we end up both fishing with either a minnow or a craw.

Along with trying different lures, experiment with presentations and the types of water you cast to, and to pay careful attention to where you catch fish. Also, watch behind your lure from the moment it comes into view on every cast. Trout are notorious followers. If you are getting followers without strikes or even passing slaps from fish that won’t commit, that means you’re close. The fish are interested in the bait but something’s just a little off, so this is when you react and slightly change one aspect of your tactic, from a different retrieve speed or cadence to replacing your lure with one slightly larger or in a different color pattern.

As you experiment, realize that a little thing can make a major difference. Be intentional about changes and watch results as you try different things, and chances are good that the crankbait pattern will become better-defined as the day progresses.

Small crankbaits fit nicely in a small stowable tackle box that you can put in a vest or shirt pocket, allowing you to travel light and to keep things simple. Just be sure to include a little pair of needle-nose pliers or hemostats to remove the tiny hooks. 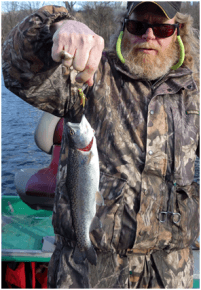 U.S. Open Bowfishing Championship shaping up to be biggest